DePauw's football program has something it's been needing for several years -- continuity at the top. After becoming the Tigers' third new head coach in as many seasons in 2006, Matt Walker is returning for his second year at the helm.

What has been strange and fortunate for the Tigers is the coaching changes have not translated to onfield struggles. Walker was 6-4 in his first season, and the Tigers have not had a losing record since they went 3-7 in 1995. 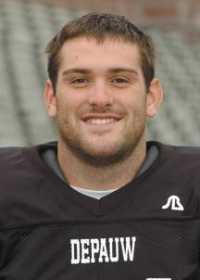 Marks should reach a big milestone in the season's very first game. The senior needs only 22 yeards to break the DePauw career rushing record of 2,941 yards set by Bart Simpson from 1971-74. Marks already broke Simpson's season rushing yards record in 2006 with 1,117.

Marks is joined in the backfield by a fellow three-time letterman in fullback Brett Claxton.

Sophomore quarterback Spud Dick will lead the Tigers' aerial attack. Dick completed 95 of his 126 passes in 2006 for 1,169 yards. He had five touchdowns and seven interceptions.

It is on the defensive side of the ball the Tigers open with a lot of question marks, having lost 8 starters from last year.

The Tigers take the field at 7 p.m. Sept. 8 at Anderson. They then have eight consecutive SCAC games before closing the regular season hosting Wabash in the 114th Monon Bell Classic Nov. 10.

Other special home games include Community Day against Center on Sept. 15, Family Weekend against Millsaps Sept. 29 and Old Gold Day against Austin Oct. 27. All home game begin at 1 p.m.