MONROVIA -- Greencastle traveled to Monrovia's home field for their season and WCC opener Friday night. Unfortunately for the Tiger Cubs, Monrovia kept it that way the whole night -- their field. The Bulldogs were victorious over the Tiger Cubs 34-0. 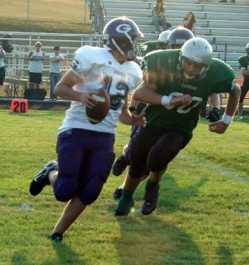 GHS quarterback Graham Shuee eludes the rush of several Monrovia defenders before getting away a pass.

Greencastle coach Mike Meyer told his team they need look no further than themselves for the game's outcome.

"You know the only person who beat us today was us," Meyer told the team.

The Tiger Cubs offense compiled 74 yards in the first quarter, but did little afterward, finishing with 106 yards of offense and five first downs. They ran 21 times for 44 yards. Quarterback Graham Shuee was 6-for-16 for 62 yards and two interceptions.

In the face of the turnovers and the paltry offensive numbers, Meyer continued to say his team needs to fix its own mistakes. Asked what his team needed to work on going into next week, he was brief.

While they were unable to put points on the board early, the Tiger Cubs' start to the game looked promising. In their first two drives, they picked up 71 yards and four first downs with a mix of rushing and passing. However, the first drive ended early with a Tiger Cub fumble.

On the second possession, they moved the ball down the field before the drive stalled at deep in Monrovia territory. Buzz Deer's 39-yard field goal attempt misse.

On their next possession, the Bulldogs turned to an unlikely source of offense and began to take over the game. Dylan Stone, who is built more like a tackle than a back, began lining up at fullback and running over or through anything in his way.

During a 12-play drive, Stone carried the ball five times for 16 yards. But it wasn't Stone's yards that got the Tiger Cubs, it was the change of pace. After two straight Stone runs, Robert Martin took the ball outside for a gain of 33. Two of Stone's rushes late in the drive were followed by Jeremiah Byrum on the outside, who took the ball 10 yards for the touchdown.

The rest of the half held little offense for either team, and Bulldogs led 6-0 at half.

After the break, though, the Tiger Cubs struggled even more. Meyer said his team simply didn't come to play in the second half.

Greencastle picked up a first down on its opening drive of the half -- its last of the game -- before punting.

The Bulldogs began their rushing attack anew, going 66 yards on 10 straight runs. A number of rushers were in the mix, with Riley Nungester finishing it off with a six yard touchdown.

One play into the next drive Shuee threw his first pick of the game, and the Bulldogs had only 24 yards to go for the next touchdown. Nungester got his second touchdown with 3:39 to go in the third.

In the fourth it was more of the same. The Bulldogs compiled 96 yards in the final frame while the Tiger Cubs could manage only four.

The final blow came with just five seconds left when Monrovia's Logan Steward intercepted Shuee and returned the ball 45 yards for the touchdown.

"Monrovia was fired up," Meyer said. "They played hard. They played four quarters."

The coach says he has a young, inexperienced team, and his leaders did not step up to counter that. He believes fixing this issue will go a long way.

"Leadership needs to improve," Meyer said. "If we can do that, we'll be OK."