CLOVERDALE -- On Thursday night, the Greencastle volleyball team defeated county rival and WCC foe Cloverdale in three games 26-24, 25-18 and 25-23 on the road. 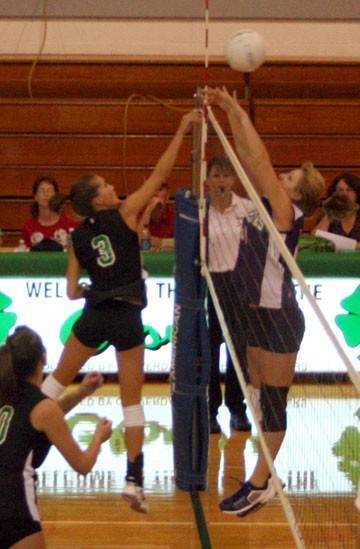 Cloverdale's Kristin McCammon (left) bumps a shot past the block attempt of Kelsey Hennette of Greencastle.

The Tiger Cubs got off to a quick start with Kelsey Hennette recorded two services aces to give Greencastle a 3-0 lead early. After a wide serve, the Clovers kept the game tight with kills from Elizabeth Cheatham and Ashley Koosman.

Cloverdale would pull out to a 21-13 lead will big plays from Koosman, Cheatham and Kristin McCammon, but Greencastle would start a run.

The game ended with two Miller aces and a wide Cloverdale return to give game one to the Tiger Cubs, 26-24.

In game two, Greencastle grabbed an early lead and built on that lead throughout the game. Kills by Miller, Brooke Lewis and Sara Land kept the Tiger Cubs rolling.

Cloverdale started to build momentum during the middle of the game. Alesha Evans dropped a shot to a bare Tiger Cubs floor but a double block from Hennette and Flint slowed the Clovers progression.

Cheatham made some big plays for the Clovers, recording a block and a kill to add points to the Clovers.

During the game, a great rally ensued between the squad, beginning with Greencastle's Sam Kuchler diving to kept the ball alive and ending when the Clovers' Koosman delivered a blazing cross-court shot to pull the Clovers within five. But Greencastle would ride their lead, to win the second game, 25-18.

In the final game, the Clovers looked ready to reverse its fortune.

Cloverdale would stay neck-and-neck with the Tiger Cubs all throughout the game and put itself in a position to take the game.

Cloverdale would take a lead after a 12-all tie and hold a two-point lead during the end of the game. But just when it looked like the Clovers would force a fourth game, the Tiger Cubs would make a run to close the game out and win the match with a final game score of 25-23.

During the third game, the Clovers changed up their game and make the Tiger Cubs change its own.

"I think that Cloverdale did a good job changing things up in the third game," Lowe said. "We took too long to figure it out and make adjustments. I think we got some bad breaks - self induced ones. Sometimes the ball falls in for and sometimes it doesn't."

Moore is sending a squad to the floor, minus two key seniors, that despite being young is making stride in their game.

"I have a lot of kids out there that can play but some of them don't have a lot of varsity experience," Moore said. "But every game I'm seeing the confidence starting to come. I feel like we're going to be all right, we just need to eliminate some of the mental errors."

The Clovers will travel to Owen Valley at 6 p.m. Tuesday and Greencastle will compete. in the Barr-Reeve Tourney at 9 a.m. Saturday.

Next match -- The Clovers will travel to Owen Valley at 6 p.m. Tuesday and Greencastle will compete. in the Barr-Reeve Tourney at 9 a.m. Saturday.