MOORESVILLE -- The Greencastle boys' soccer team ran into a tough Martinsville squad in the first game of the Mooresville sectional Thursday night. The Tiger Cubs lost to the Artesians 6-0.

The first half for GHS was one to forget. 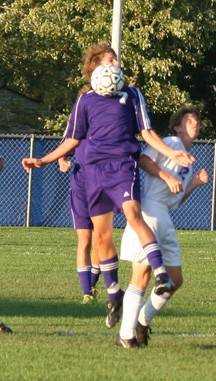 Greencastle midfielder Spencer Moore plays a ball off his chest in Thursday's loss to Martinsville.

"Our inexperience showed," GHS head coach Dave Lilly said. "They are a good team, a very experienced team. They came out and got a couple of goals quick and we didn't really adjust at all to them."

The Artesians jumped on the scoreboard early and continued to press the Tiger Cubs, keeping them on their heels most of the first half. The trio of Nick Spina, Anthony Spina and Brock Brundgard provided the firepower for Martinsville.

Nick Spina was first to score with only two minutes gone in the first half. Anthony Spina scored two minutes later, moving the Artesians out to a quick 2-0 lead.

On a positive note, Greencastle held the Artesians scoreless in the second half but was unable to advance the ball on the offensive side.

"We changed up some personnel in the second half and instead of being a little bit more defensive minded with our midfielders, we had to try to get some goals," Lilly said. "We just did possess the ball. We got down and the guys started to panic a little bit and started to play long through balls. We'd get possession and then we turn it right back over.

"We never got our combination play going," Lilly commented.

Lilly talked about his defense and the leadership of its two seniors, Tim Bray and Adam Clute. He noted Bray's grittiness.

"The backline is one most guys don't like to play because all the glory is up front with the scoring and assists. He's fast, he's not afraid to get in there and play physical. He's played well for us," Lilly acknowledged.

The Tiger Cubs exited the field as their coach summed up what was written on each player's face.

"It's a disappointing way to end," Lilly said.