By PAUL WILCOXEN, For the BannerGraphic

FERDINAND -- After coming off a second straight Tri-West Sectional title, Cloverdale volleyball coach Kathy Moore knew her team could beat its opening match opponent, Linton-Stockton, at the Forest Park Regional, but in order to do that she admitted that her team would have to play at its best. 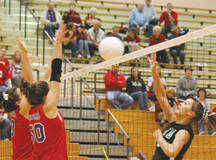 Although the Lady Clovers managed times of showing they were the better team, Linton refuted all rallies en route to a three game victory, 25-18, 25-16, 25-22 Saturday at Ferdinand.

"It wasn't one of our better games," said Moore. "I'm not sure why, but I guess when you get to this stage in the season, I guess you've got a lot more pressure to win. Sometimes the harder you try, the harder you make things for yourself.

"You just have to relax and go with the flow of the game."

Cloverdale managed to keep the first half of match 1 close until serving from Linton's Izzy Carpenter gave the Lady Miners a slight cushion, 16-13.

Linton opened up a 21-14 lead with back-to-back tips by Brittany Rehmel and Ashley Sparks.

Cloverdale's Kaileigh Sparks delivered an ace and scored on a hitting error from the Miners to cut into Linton's lead, 22-18.

But after a Miner time out, Linton settled down with a kill by Rehmel (23-18) and consecutive hitting errors from Cloverdale to end Game 1.

Coach Moore said after the match that Linton did a nice job of exploiting an open middle on the Clovers' defense.

"I had to call a time out and talked about that soft spot," said Moore. "Our wing person really needed to step up and cover that and she wasn't doing it. They (Linton) were taking advantage of it."

The Clovers tied the game at 16 with a kill from Kristin McCammon and a block by Elizabeth Cheatham.

But it was at that point that Linton senior Ashlea Beard deliverd nine straight service points, aided by three kills from Megan Barnes, as well as a kill by Rehmel and a double block from Barnes and Rehmel.

"I thought we dug up most of their hits, just a few of them got by us," said Moore. "We play best when we're attacking the ball. When we have to free ball it, too many free balls and you're going to get yourself into trouble because it's another chance for the other team to get their hands on the ball. I think if we would have had fewer free balls, I think we would have had a better outcome."

Ashley Koosman had two blocks, nine kils and 37 digs. Kristen Schroer had 12 digs and two blocks. Whitney Bond had 34 digs, while Cheatham had four blocks, one kill and two digs.

"With rally scoring it's a game of spurts," said Moore. "With a game of rallies, it can turn on a dime. That's the fun part of the match. Someone serves it out of bounds, the next thing you know you're down six points. That's just the way it is."

Cloverdale picking up a kill from Ashley Koosman and three miscues by Linton led to coach Penny Dunn calling two time outs during the rally.

After the Miners took control with two aces by Bohnert (22-19), Cloverdale managed a side out and kill by Koosman to cut the lead by Linton, 22-21.

But in the end, when Linton needed just one point to secure its first trip to the regional championship, it turned to Beard, who delievered a kill for the victory.

"I'd have to say, we had a two and a half hour drive down here, and that's hard," added Moore. "I'm really proud of my girls and I know they played with their hearts. It's not their best performance, but I'm pleased because they did try really hard and that's all you can ask of kids."