MONROVIA -- With a cold November wind descending upon Monrovia's Gordon Hadley field, the North Putnam Cougars turned up the heat in the second half and defeated the Bulldogs 26-7 to capture their second consecutive sectional championship.

Believed to be but a stepping-stone to the regional, Monrovia took the field with nothing to lose and controlled the game early.

"Their game plan was outstanding and their effort was tremendous. I didn't think we matched their effort early," Cougar head coach Dave Pasch said. 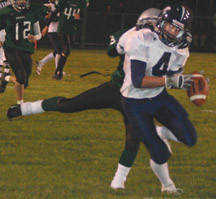 With a Monrovia defender on his back, North Putnam junior Jerrett Ban hauls in a fourth-quarter touchdown. Ban ran away from the defense to put the Cougars up 18-7 on the play.

The Bulldogs took the ball down the field on their second possession of the night, riding the combo of Dylan Stone and Garrett Johnson into the end zone with 3:37 on the clock.

North Putnam returned the favor after the Bulldog kickoff.

Junior quarterback Griffen Dahlstrom broke through the line and tore down the sideline, leaving a trail of Bulldogs defenders behind him. Dahlstrom took the ball 78 yards to score North's first points of the game. With a failed point after, the Cougars trailed 7-6, a score that would hold until the half.

As the teams left the field, the look on the Cougars' faces was one of determination -- determined to showcase the form that got them to the finals.

The Cougar faithful didn't have to wait long to see how North Putnam would respond following halftime.

The Cougars marched down the field in 14 plays and seized their first lead of the game when Dahlstrom took the ball in from two yards out, making the score 12-7 in favor of North Putnam with 4:29 on the clock.

"The intensity level really picked up," Dahlstrom said. "We knew the first half we had gotten outplayed and at halftime that was one of the big things was intensity. We made a few adjustments at halftime and the backs just picked it up."

"We had some problems to solve. We haven't had too many halftimes this year where we had to go and work at halftime," Pasch commented. "We came out with a little different look and used some things we didn't think we would have to use tonight.

"We had to switch gear and game plans a little bit," he said.

The remainder of the third quarter was a seesaw battle as both teams were unable to capitalize on their opportunities.

In the fourth quarter, North Putnam jumped out early and proved its dominance once again.

Dahlstrom connected with Jerrett Ban on a 75-yard touchdown bomb that put the Cougars up 20-7 just 52 seconds into the quarter.

The Cougars tacked on their final touchdown of the night at the 2:01 mark when Kyle Rooker rushed the ball 23 yard through the Monrovia defense, bringing the score to its final of 26-7.

The Cougars have a week to regroup as they host the regional championship game on Friday. There are three weeks remaining in the tournament with regional, semistate and state being single-round championships.

Dahlstrom was asked what he believed was the key to the game after the team accepted the sectional trophy, to which he responded -- team focus.

"Just staying focused. We had a couple of times where our character was really tested. Mentally we just had to stay tough throughout the game," he said.

Having helped his team capture its second straight sectional title, Dahlstrom was all smiles despite feeling the pains delivered by the Bulldog defense.

"It feels great. It's the first time in our school history that we've done that," He commented. "That was one of the big things we talked about this week is a lot of people had doubts and that was a motivator for us to come out and get the job done.

"I got a couple of nicks here and there but nothing that won't heal," he concluded with a grin.