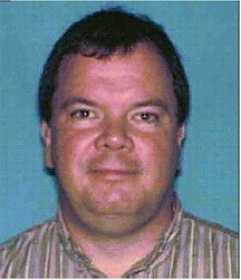 If you see this man, call the Putnam County Sheriff's Department at 653-3211

LEBANON -- A suspect has been identified in the September 2006 robbery of a Greencastle bank, and a high-speed chase Wednesday has prompted police to issue a public alert for the man.

John Oliver Study, 42, is believed to be armed and dangerous. He is wanted for questioning in at least nine bank robberies in central Indiana, as well as possession of stolen property in Putnam County.

"He is very bold and very quick," Putnam County Sheriff Mark Frisbie said during a Wednesday night press conference at the Boone County Jail in Lebanon. "The robberies themselves are very aggressive."

That is why police are warning the public, banks and other law enforcement agencies to take care if they come across Study (pronounced "Stoody").

He is described as being 6 feet tall and weighing 260 pounds.

Despite his large size, Sheriff Frisbie also describes him as a ghost due to Study's ability to disappear from a crime scene.

In the Greencastle case, Study entered the First National Bank on Indianapolis Road, armed with a silver handgun. After taking the money, he fled to his truck, and then "disappeared".

Frisbie said there was a police unit within two blocks of the bank at the time, but no trace was found of the suspect vehicle.

Study avoided arrested on Wednesday after police tried to approach him at a location in Madison County. Study fled driving a silver Chevrolet Cobalt with an "In God We Trust" license plate with possible plate number QU1449. Police believe the car is stolen.

The chase led through Tipton, Madison and Hamilton counties with units from the U.S. Marshal's Office and local law enforcement units in the area.

Boone County Sheriff Ken Campbell reported that Study avoided arrest after units determined that his reckless disregard for other motorist safety became too dangerous and units terminated the pursuit.

Both Sheriff Campbell and Captain Kevin Jowitt of the Hamilton County Sheriff's Office credit Putnam County Sheriff Frisbie with cracking open the case against Study, who has served prison time for a 1983 bank robbery conviction.

Frisbie told the BannerGraphic his officers located Study at a property near Reelsville about two weeks ago. They were acting on a tip about a stolen backhoe when they attempted to serve a warrant at the property. At the time, officers did not know they were stumbling onto a possible serial bank robber.

Study was not there, Frisbie said, but the officers determined that the backhoe as well as another piece of heavy equipment was stolen. And they found that the travel trailer that Study was living in with his wife had been stolen in Illinois.

A search of the property turned up items that started linking the man to the area bank robberies. Frisbie said that investigation quickly turned into a cooperative effort with police agencies in Hamilton, Boone and Fountain counties.

"Mark is the one who tumbled it for us," Howitt said, "and we are grateful."

Frisbie said that Study has not returned to the Reelsville area property that police area aware of. His last known residence was in Zionsville, but he could be living anywhere.

It is known, Frisbie said, that Study was driving a stolen truck when he robbed the Greencastle bank, and that he continued to drive that truck for several weeks after the robbery. That bold move, as well as his reckless driving, have led police to believe the suspect would be a danger to anyone who corners him.

Anyone with information on the possible whereabouts of Study is encouraged to contact the Putnam County Sheriff's Office at 653-3211. An anonymous tip line is available.