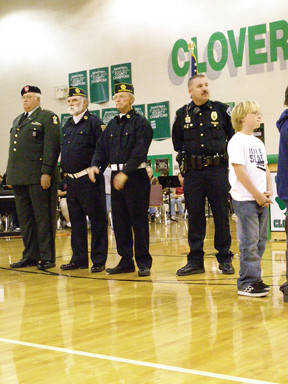 CLOVERDALE -- When Cloverdale Middle School Assistant Principal Dave Walton asked the students who have family members who served in the military to line up across the gymnasium and tell the crowd about their loved one at Friday's Veterans Day service, most of Tyler and Andrew Howard's peers talked about grandfathers and uncles who served in decades-old wars.

Many couldn't remember which branch their loved one served and sometimes they couldn't even remember the conflict.

But there's no past tense when the Howard boys talk about their father's military service. Sgt. Aaron Howard, an aircraft mechanic in Tallil, Iraq, is still in harm's way and Tyler, 14, and Andrew, 12, seem to be acutely aware of it.

"I think about him all the time," Tyler said.

The boys haven't seen their father since he was deployed Aug. 1 and for them, Veterans Day means something special, Tyler said.