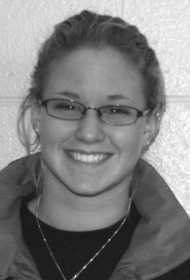 Taking over a highly successful program as a first-time head coach is a mixed blessing. On one hand, returning athletes understand what it takes to be successful and what is expected of them. On the other hand, high expectations can sometimes be overwhelming.

Approaching his first year as Greencastle High School girls' swimming coach, both ends of this issue are on the mind of Luke Beasley.

"On my end, it was intimidating following a guy like Mr. Bretscher because you hear so much about the success that he had," Beasley said. "But at the same time it was also very helpful because it wasn't something where I had to come here and take on a rebuilding project. He left me in good shape.

"He has really left something pretty special here at the high school," he continued. "For me to come in and be given the situation where I already have a lot of talent and a lot of people with a developed work ethic and a lot of swimmers with the right attitude. They are ready to take on whatever challenges that I, as a coach, present them with. It's extremely helpful."

In practice thus far, the swimmers have given Beasley the respect they would a veteran.

"So far in practices the girls have taken really well to what I've put on them," Beasley said. "Just here in a few weeks we've already made a lot of strides in terms of conditioning. We have a well-balanced team -- some really strong stroke swimmers, some really strong freestylers."

Looking at his team, Beasley does not find a whole lot of weaknesses. Among his top freestylers, he has a good sprinter (Erica Soster), 200 swimmer (Erika Collins) and 500 swimmer (Morgan Terry).

"When you have a medley relay that qualifies for state, that shows you have a versatile team. We have very balanced distribution," the coach said.

"Kelsey Murtagh who owns two school records in the backstroke and the fly," Beasley said. "She had some shoulder difficulties, but she's really coming on in practice and giving us the type of work we need from her."

Another member of the relay team is having shoulder difficulties.

"Caitlin is actually struggling with a shoulder injury right now. That's certainly a little disappointing at this point in the season," Beasley said. "She is an excellent breaststroker."

GHS features depth in the stroke, though, as Beasley said Sydney Terry is coming in as a strong freshman breaststroker.

With between 20 and 22 swimmers, though, it was not simply the top swimmers Beasley emphasized. Everyone has been putting in good workouts.

"I've been really impressed with how the whole team has responded, not just the girls who tend to be a little faster, but the girls who don't necessarily score as many points," Beasley said.

Among the good efforts, Beasley has been especially impressed with Ball, who swims hard every single day.

"Melissa Ball is a sophomore with terrific work ethic. I told her today that she hits everything. Every set I give her, she hits it," Beasley said. "It's kind of strange, as a coach and a former swimmer, seeing someone who doesn't have those letdown days. She brings it every day in practice."

Three "hard-working seniors," according to Beasley, lead the Tiger Sharks. They are Soster, Emma Hazel and Dana Norman, who successfully balances swimming with a job.

On the other end, the team has four freshmen, all of whom the coach thinks have a chance to contribute.

The Sharks have high goals for themselves. The coach wants them all to build on what last year's medley relay (as well as Murtagh individually) accomplished.

"We're certainly looking to build on that. We want to take that medley back to state and we want to bring some more individuals to state," Beasley said. "Erika Collins told me at the beginning of the year that her goal was to break the 200 free record, and I want to help her reach that goal. I want to get her to state.

"All these seniors, I want them to experience that state competition. Hopefully we can start to build the type of program that starts to do it perennially," the coach concluded.