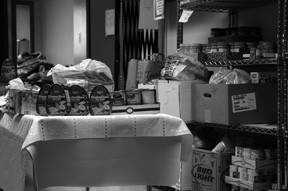 Across the nation, food pantries are bearing down for a tough winter. As the economy skids, food donation rates are down and more families are finding themselves in need of a help to put food on the table, the Putnam County Emergency Food Bank is working hard to meet an ever-increasing demand.

The U.S. Department of Agriculture's annual hunger survey released Wednesday says that 35.5 million people were hungry last year, and that includes hundreds of families in Putnam County. Though that number is relatively stable when compared to figures from 2005, local food pantry officials say more and more people are seeking their help.

Alice White started working at the Putnam County Emergency Food Bank in 1996 and says she can't believe how things have changed.

Today, the numbers look quite different.

"We gave food to 80 families this morning, and one day it was 105," she said. "I have no idea what tomorrow will bring."

Demand for food is being driven up by the rising cost of housing, utilities, healthcare, food and gasoline, while many who are reliable donors of food, such as manufacturers and wholesalers have less food to donate, according to the Associated Press.

A relatively mild November has staved off demand this year, but with the first snow looming, many food pantry officials predict an increased need.

"The price of gas keeps going up," she said. "Home heating bills are about to hit families hard."

Though she is concerned about what the winter may bring, White said that when she saw media coverage of food shortages in other areas she felt guilty, "We have so much."

White said that the Putnam County community has been very generous over the years, before listing the Pantry's many donors.

In fact, White hates to leave anyone off of her list, even those who wish to remain anonymous.

"We have a mystery man who comes in about once a month with a whole trolley full of food, but will never tell us his name," she said. Volunteers at the pantry call him "Mr. John Doe."

Outside of the food pantry, located at the Putnam County Senior Center, White finds a regular $20 cash donation, like clockwork every month.

Anonymous and individual donations are only one portion of the pantries stock and budget.

White reported that a constant stream of donations from local churches, sororities and fraternities, the FFA, the DePauw football team, and numerous others over the years have allowed the pantry to operate without government assistance, and thus offer help to many more families.

"We don't ask questions, or require proof of income," said White, who added that some places require rent receipts, utility stubs and other proof of need, and some set limits on how often a family can receive assistance.

"You come when you are out of money and out of food," White said. "We don't turn anybody away."

Though White is confident that the Putnam County Emergency Food Pantry is in better shape than other pantries across the state and the nation, she admits that there is uncertainty, and likely tough times ahead.

"Come back in a few months and these shelves won't be as full," White said.