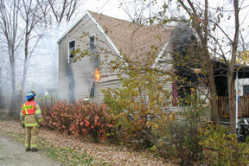 A late-morning fire tore through a Greencastle home on Wednesday, destroying everything inside.

The family -- two adults and three children -- made it out of the home safely but watched as firefighters battled the blaze for about an hour.

Greencastle firefighters were dispatched to 1009 Avenue D shortly after 9 a.m. When they arrived, they found the front of the house fully engulfed in flames, said Greencastle Fire Chief Bill Newgent. 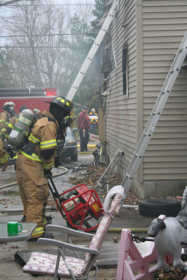 Investigators did not yet know the cause of the blaze Wednesday morning, though the fire started in a front bedroom, he said.

The names of the victims were not immediately available, however, the home is owned by Opportunity Housing of Putnam County. The agency completed a $50,000 renovation of the house in January, said Debbie Davis, the group's director.

Fortunately the agency has another house that was recently completed on Avenue B and Davis said she hoped to move the family into the new house Wednesday night. 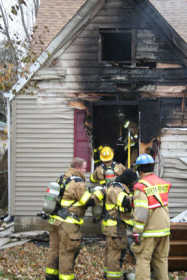 The Red Cross of Putnam County was contacted to provide support for the family, Newgent said.

For more on this story, look in Friday's edition of the BannerGraphic.