By IVY JACKSON, For the BannerGraphic 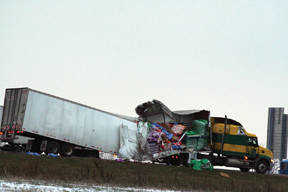 This semi-tractor accident on Interstate 70 in Clay County caused westbound traffic to be diverted Friday.

Traffic in Putnam and and other western Indiana counties was snarled all evening Friday due to accidents on Interstate 70, resulting in excess vehicles on U.S. 231 and U.S. 40.

Two separate collisions within seconds of each other closed the westbound lane of the interstate at the 23-mile marker Friday evening for several hours. Although currently under investigation, officials believe two collisions made up one accident involving three semi-tractor trailers and a minivan.

Shortly before 4:40 p.m., a driver pulled a semi, which had undisclosed technical problems, in the area between the interstate and the on-ramp while waiting for a wrecker service.

Officials said the driver had the appropriate traffic hazard signs out on the road, but apparently the truck was partially sticking out in the westbound lane of I-70.

The driver of an oncoming westbound semi tractor-trailer filled with approximately 44,000 pounds of Iams dog food was unable slow down to avoid striking the first semi. The collision ripped open the trailer of the second semi and about a third of its contents spilled onto the westbound lane for about a half-mile before the driver could stop.

The back of the first semi was torn off and the load of heater coils spilled onto the roadway.

With flying dog food and heater coils spilling onto the interstate, the driver of a minivan attempted to avoid hitting the first semi and swerved into the path of another semi tractor-trailer, which rear-ended the mini-van.

The third semi-tractor trailer jackknifed and broke apart, with the two pieces coming to rest in the median of the highway in opposite directions. The mini-van also came to a stop in the median a few yards away from the third semi.

While the eastbound lane of I-70 was unaffected by the accident, some westbound vehicles were allowed to pass around the accident scene before officials closed the highway at the 23-mile marker.

Members of the Clay County Sheriff's Department and Indiana State Police allowed several vehicles directly behind the accident on the interstate along with those stopped on the on-ramp to continue westward at a slowed pace.

At the same time, officials stopped vehicles before the I-70 off-ramp at the Brazil exit so drivers could exit onto State Road 59 to use other routes. The Indiana Department of Transportation placed signs in the area to help direct the traffic at the off-ramp.

Traffic was also diverted onto U.S. 231 at Cloverdale.

Officials were amazed that no one involved in the accident sustained major injuries during the accident.

"Mother Nature will take care of cleaning the road now," CCSD Sgt. Dan Best said when it began to rain. "It is a miracle that no one was hurt worse."

It took several hours to clear the debris and dog food from the roadway so the interstate could be reopened.

Ivy Jackson is a reporter for the Brazil Times, sister paper of the BannerGraphic.