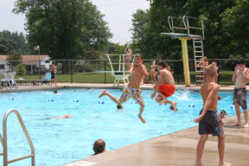 A vast majority of voters on the BannerGraphic's unofficial web pool expressed a desire to leave the city pool open longer at the end of the summer.

Currently, the aquatics center at Greencastle's Robe-Ann Park closes for the season in early to mid-August, depending on when local students return to school.

During the March meeting of the Greencastle Park Board, member Russ Evans asked the Parks and Recreation Department to re-consider a previous decision to close the pool at the start of school.

Parks and Recreation Director Rodweinschenk said most of the lifeguards and staff, who are college students, return to classes, which makes it impossible to keep the pool open.

Additionally, he said it isn't feasible to have the pool open during the week because everyone is in school.

Evans, on the other hand, suggested the pool be opened only on the weekends up to Labor Day and under reduced hours.

Following the meeting, the BannerGraphic posed the question to readers on its website, and here's what they had to say:

"The pool being open after school and on weekends is a great idea. The children return to school during the hottest part of the summer and would love the cool-down after school."

"Give parents a time to swim in the pool while the kids are in school. This should be, after the parents have watched the kids swim all summer."

The specific vote tallies to the question: "Do you think the Greencastle City Pool should stay open until Labor Day?" are as follows: