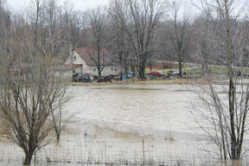 Floodwaters from a nearby creek flow close to this house near the 32-mile marker of Interstate 70 West, just before Clay County, on Wednesday. Several roads in the county have water rising over the roadway. Motorists are urged to be cautious.

Rainfall ranging from just over an inch in northern Putnam County to over three inches near Cloverdale has necessitated the temporary closure of up to 18 county roads, according to Putnam County Dispatch.

County Highway Superintendent Dave Sutherland stated that the Dunbar Bridge area was the most severely affected.

In a related item, Conservation Officer Kenny Spence estimates that nearly two billion gallons of water will be flowing into Cagles Mill (Lieber) Lake in the next 24 hours. That equates to nearly 3,500 cubic feet per minute.

The National Weather Service issued a flood warning that was to begin at around 10:30 a.m. on Wednesday and conclude at 8 p.m.

The forecast called for continued rain, which would be heavy at times, and exacerbate the existing flooding problems.

Downstate, reports indicated a total of 6.2 inches of rain fell at Evansville Regional Airport over a 24-hour period that ended Wednesday morning.

Southwest Indiana absorbed between 4 and 7 inches of rain, with the heaviest totals recorded between Evansville and Mount Vernon.