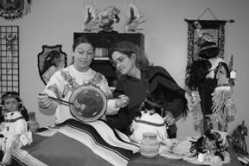 Sisters Celeste Butler and Debbie Rush look over merchandise in their store Cherokee Sisters located on the square in downtown Greencastle. The sisters whose grandfather was a full-blooded Cherokee feature all types of Indian relics and artifacts.

There's a new business on the square in Greencastle unlike any other in town. The two women who own it sell Native American relics and artifacts but customers get much more out of a visit to their store than just purchased items.

Called Cherokee Sisters, the store name reflects its owners. Celeste Butler and Debbie Rush are sisters whose grandfather was a full-blooded Cherokee Indian. Proud of their heritage, the sisters quickly tell customers how many people in Putnam County have Native American ties.

"You would be amazed at how many people come in and tell us about their Indian heritage. There are a lot of people here locally who have ties to Indians. We have met Cherokee, Apache and Miami Indians already," comments Rush.

Only having been open for two weeks, the women already find they are a messenger service about local powwows and other meetings among Native Americans.

Originally, Butler considered opening the store in Cloverdale to be near the new horse arena.

"We wanted to sell tack equipment and Native American relic items but we couldn't find a spot that we could afford that was move-in condition," remarked Butler.

"Then we found out the horse arena had vendors already for tack equipment. We started looking around Greencastle. Most of the spaces we looked at wanted $1000 a square foot for rent. We couldn't do that," said Butler.

"I was driving around and saw this space on the square and knew it was just right," she added.

The landlords let them come in two weeks rent-free to paint and set up the store. Their families helped by painting, cleaning, and setting up the store.

Rush drew a mural on one wall in the store of the ten Native American commandments. Her son, Michael Rush painted it. She plans to paint another mural as soon as the store can expand and fill the entire first floor space.

"Debbie is my backbone," says Butler. "I couldn't do this without her. She watches over me and takes care of things for me."

Butler is a 15-year native of Cloverdale and has children and her mother living in the area.

"My sister is a true Indian, she roams," says Butler. "I gave her half ownership in the store because she does so much of the work," adds Butler. Rush's son also lives in Cloverdale and her daughter resides in Coatesville.

The sisters are two out of eight children born into a military family. Their grandparents came from a family of 16.

The women are optimistic about the stores growth. They hope to expand soon. The two sisters offer items ranging from woven baskets and blankets to porcelain dolls to dream catchers to statues. They also have turquoise jewelry, Mandela's, placemats and much more.

"Right now, we are a little limited in what all we can offer customers. But, if we don't have what someone is looking for, we'll find it," said Butler. "We have a list already that has white sage and headdresses on it."

"We have big dreams for this store," says Butler who plans to begin selling local Native American made products soon.

Currently the store is open from Monday-Saturday from 9 a.m. to 6 p.m.

"I put all my savings into my dream," says Butler as she gently touches the feathers of a dream catcher hanging overhead.

"We are praying the Lord starts sending customer through the door," adds Rush.