One if by Land, two if by propane Dixie Chopper 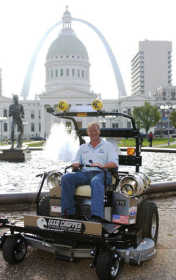 Matt Land, Greencastle, seated on the lawn mower with the city of St. Louis in the background.

Just in time for Earth Day 2008, Dixie Chopper's Matt Land is on the road again.

After putting his propane-powered Dixie through an 1,800-mile test drive that began on Earth Day last spring, Land is immersed in a non-stop schedule only a rock 'n roll roadie might appreciate.

Leaving his LP3000 mower behind this time, Land has taken to the air, flying to Washington, D.C., Atlanta, Nashville, New Orleans and Los Angeles recently to help spread the word about Dixie Chopper's propane-powered mower.

Well, in early May, the Dixie Chopper sales and marketing director will speak at a Clean Cities conference in Las Vegas -- an invitation extended after the Central Indiana Clean Cities Alliance honored Dixie Chopper with its 2008 Stakeholder Achievement Award for outstanding accomplishment in the development of the first original engine manufactured (OEM) propane-powered mower.

Dixie Chopper has sold more propane-powered units this spring than it had collectively the first two years the LP 3000 was on the market, Land said as Earth Day 2008 (April 22) nears.

"And the number of telephone calls just the last three weeks has been more than the past year because people are coming into dealerships and asking about it," he stressed.

In 2006, Dixie Chopper partnered with Wisconsin engine manufacturer Generac to develop the LP3000 as a new line of "world's fastest lawn mowers." Over the past two years, that concept has gone from drawing board to reality as a supposedly cleaner, less-expensive mowing alternative.

With crude oil more than $100 a barrel, gasoline nearing $3.50 a gallon at the pump, and diesel topping $4, the price of propane -- roughly half that of gasoline -- is pretty sexy these days.

"Hey, going 'green' sounded great but apparently the only green that matters is the green in your wallet. It's a shame it took that for people to wake up," Land said. "It's simple economics really -- you can cut your operating costs in half with fuel savings alone, not to mention the increase in productivity."

With price an issue on one hand and clean air a concern on the other, it has become a perfect storm of interest in the propane-powered Dixie Chopper.

That's what has taken Land all over the country, talking about the issues of price, productivity and the environment.

"When I was on my trip on Route 66," he said, "it was all about the environment -- 50 percent fewer ozone-forming emissions, less greenhouse gases, extended engine oil life, extended engine life."

Spills aren't possible with the propane mower, which features a sealed, vaporless system that vents no fuel into the atmosphere.

"And here's a simple question," Land offered. "You'll eat a hotdog or steak cooked over a propane flame, right? Would you eat that same food if it were cooked over a gasoline or diesel flame?"

Land realizes it will take the public a while to digest those facts, but he is confident Dixie Chopper is on the right track.

"Last spring on our trip we couldn't beg, borrow or steal time with any of the real decision-makers," he said. "They wouldn't listen to us. And now everybody wants to talk about it. Where were you guys? I wasn't hard to find. I was the guy out there on the mower for 18 days making sure the LP3000 is 'Route 66 tested-tough.'"