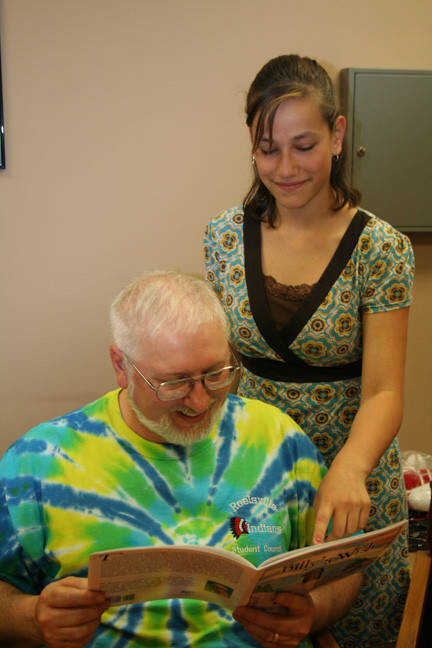 REELSVILLE -- A busy little town called Reelsville was once nestled in a valley half a mile north of the village of Pleasant Gardens on S.R. 40.

It is this tiny agricultural area that local author William Barnett based his newly published children's story, "Billy's Wish," on.

Barnett is a longtime resident of the Reelsville area and has been the custodian at Reelsville Elementary School for 23 years.

His semi-autobiographical book is currently under publication, with copies due out in a few weeks from PublishAmerica.

The book is the story of main character Billy's idyllic life on a farm filled with animals. The closest town, Pleasant Gardens, provides Billy and his readers a look into simpler times.

In the book, Billy does things to help his family and neighbors, and he has a mission -- he wants to make Christmas last all year.

Billy is amazingly similar to Barnett himself. One can see a similarity between him and the man in red that epitomizes the spirit of Christmas.

Barnett is much more than a custodian or an author to the students and faculty at Reelsville Elementary School.

Barnett works closely with the students at Reelsville Elementary, constantly teaching them in the ways of giving. He has been the Student Council Adviser at the school for six of the last seven years.

"He teaches leadership and organizational skills to the kids, but he does so much more," said principal Teresa Vapor. "Mr. Bill is really good at seeing the big picture and creatively coming up with a way to spread that goodness throughout the community. When he works in a classroom he is low key, patient and so dedicated and selfless. He is genuine and constant, always finding more ways to make things better.

"He is a member of the student assistance team offering a positive role model to kids. He gives whatever is needed. If it takes more, he will give more. We all turn to him for all kinds of things," Vapor continued.

As a member of the Review & Practice Group (RAP) at the school, Barnett leads one group that meets to review academic achievement and to help tutor kids.

"He is an awesome man. A true Renaissance man who knows so many things. He can work on motors or anything electric. He knows computers, can build anything and is self-taught," said Vapor.

Barnett thought about writing his book for about a year. It only took one weekend to get the gist of it down on paper.

Then he spent about a year tweaking it.

His wife, Janna is 100 percent supportive of Barnett's work at the school and anything else he undertakes.

"She bakes the goodies for the school's monthly PTO meetings. She makes things like Tiramisu and other stuff I can't even pronounce," said Barnett.

"Our parents love it," said Vapor. "It gives a special feeling to the meetings. Sort of enhances them somehow."

Barnett doesn't forget about his own kids. His daughter Casey is a sophomore at South Putnam High School and son William III will graduate from Ball State University next December. He also has a stepson, Coleman Lanham.

The family plans to travel to Ft. Lauderdale, Fla. this summer, take a cruise to Nassau, Bahamas, and come back home through Orlando, Fla. Even Barnett's mother will travel with the group.

"A few years ago, Mr. Bill took his daughter to Orlando to swim with the dolphins. He loves to travel," said Vapor.

Barnett's love of the students at Reelsville Elementary is apparent. Even while writing his book he considered how they could be involved.

"I needed someone to illustrate the story for me," said Barnett, who went to the sixth grade class and offered his manuscript to them to read. One of the students, Tori Lynn Kiste, drew some pictures of her favorite characters in the book.

Barnett asked her to be his illustrator, and her name is featured under Barnett's on the book's cover.

"I was really excited when I found out the book was going to be published," Kiste said. "My mom and I did a happy dance. Our own happy dance."

Barnett wrote the book because he always thought about how things were around the holidays.

"If you are gonna give, you should give all year long," he said.

Barnett practices what he preaches, sharing his message of giving with a group of student council members at Reelsville.

Under Barnett's guidance the groups has worked on multiple fundraising projects that include selling McDonald's coupon books to raise money to buy toys for low income families; a food drive that has included up to 25 boxes of donations; a penny war for Relay for Life; selling paper hearts for Riley Hospital; throwing a staff appreciation party for Reelsville Elementary staff; and spearheading a collaboration with teachers to work on the school grounds.

One of his most impressive accomplishments with the group of eight kids is the establishment of a $300 scholarship given every year to a South Putnam High School Senior who attended Reelsville Elementary.

"He does keep Christmas in his heart all year, everyday," said Vapor. "At the fall festival he is always there with the student council. They have had an ice cream booth, sold cotton candy and had popcorn parties."

Barnett recently received a grant from Wal-Mart for $500 and used it to purchase DVD players for all the televisions in the classrooms.

Barnett's book was picked up by a publisher within weeks of submission. The first 100 books will be out soon, and he plans on promoting the tome locally. He has family members throughout the United States who are eager to help him sell the book as well.

His publisher has suggested he send a copy to the "Oprah Winfrey Show," and Vapor has already written an introductory letter to send along.

"That would be the icing on the cake," said Barnett. "To get flown to the Oprah show would be so great."

Barnett plans to create a series of Billy books.

"I'd like to do a whole series on life lessons for kids," he said. "Kids need to learn to make this day the best it can be."

In the meantime, Mr. Bill keeps giving his own gifts of the heart to the school and community he loves. He continues to teach the kids at Reelsville Elementary his philosophy whether in a book or in life, "Wherever you go and whatever you do-you should leave it better than when you approached it."

For information about "Billy's Wish" or to purchase a book, go online to publishamerica.com and search for ISB number 1-60563-330-5.