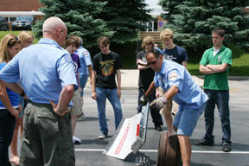 Scott Stierwalt, a member of the Wal-Mart Distribution Truck Safety team showed Greencastle High School Drivers Education students roadside hazards from semis. The four-man team spent most of the day at the high school demonstrating how to drive safely around large trucks.

The men are part of a team who spend much of the early summer giving driving safety instructions to driver education students. Monday they were at Greencastle High School (GHS) with their big rigs showing kids how to drive safely around semi trucks.

Demonstrations include having students sit in the cabs that pull 50,000 pound trailers. Behind the wheel, students check mirrors for blind spots and get a feel for what truck drivers see when they are on the road.

"These guys do a bang- up job. The kids walk away from this demonstration with more of an appreciation for what big rig drivers experience on a daily basis," said GHS Summer Drivers Education Coordinator and Instructor Dan Layton.

The Truck Safety Program is sponsored and paid for by Wal-Mart.

"They do this program all over the country. During June and July they send out trucks just like these two, pulled right off the road, to take to drivers education classes," said Buchanan.

This is the third year for this team of men to do the safety training and the 15th year for the program. The cost of the program is well over $100,000 according to Buchanan.

They bantered back and forth about texting and talking on cell phones while driving, with Stierwalt and Mark acting like teenagers behind the wheel.

They jokingly made their point. Don't let other things distract you while driving.

During the class the men demonstrate what happens when a truck is taking a turn around a corner similar to going around the courthouse on S.R. 231 in downtown Greencastle. The kids stood as if they were on the sidewalk and were next to the truck as it took a turn.

Several jumped back seeing how close it came.

The team talked about staying out of the "no zones." These are areas where trucks can't see you in their mirrors or beside them.

The men demonstrated this by actually pulling a small truck alongside a semi as it took a wide turn right in front of them. They explained how easily the side of the semi could tear off the hood of the small truck and not have it affect the huge semi.

"These are dangerous situations," said Stierwalt. "There is no way for the truck driver to see you if you pull into the lane beside him when he is taking a wide turn."

Stierwalt also showed the class all the parts that can come off a truck and cause a driving hazard including wheel wheels, blown tires and pieces of metal.

All four of the instructors are committed to teaching safe driving around trucks to young drivers. Two of the men have personal experiences with losing loved ones in accidents.

Gerry Hays lost his son in Feb. 19 in an accident in Crawfordsville and Scott Stierwalt lost both a daughter and granddaughter in an accident several years ago.

Both men told the class of ten students a poignant story of the accidents and how it has affected their lives.

Hays son was returning to work in Cloverdale after visiting his girlfriend at Purdue University. He hit a pole while driving through Crawfordsville.

"We don't really know what happened. We think he dropped his cell phone and reached down to pick it up. He wasn't wearing his seat belt. I got to the cemetery all the time to visit his grave," said Hays.

Stierwalt also told a devastating story about losing his daughter and granddaughter who lay in a ravine for hours before being found. His other granddaughter, now five was in a car seat that slid down the road right side up for several feet. She was unharmed.

"I do this because I know my daughter would want me to. I don't ever want any of you to be in this situation. I cry, sometimes everyday. My granddaughter knows her mother died in an accident. She will never have her mother," he said.

"We've been there. Gerry and I know what it's like to lose a child. It's the worse thing a parent can every have happen. We want you to be safe," Steirwalt told the group at the end of the session.

The team will return to do another demonstration at GHS for the July driver's education class.