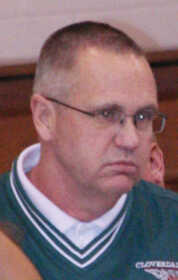 CLOVERDALE -- The Cloverdale Community School Board shocked observers in the meeting and around the community Monday night, when it voted 5-2 against renewing Bruce Cook's contract as varsity girls' basketball coach.

The news came as a surprise to Cook, as he was coaching his team in a summer league game at Cascade while the meeting took place. He found out through a phone call on the way back from the game.

But the coach wasn't the only one surprised. His teams have amassed a 54-51 record as well as county and conference championships.

"I'm really proud of what the girls have done over the last five years," Cook told the BannerGraphic Tuesday evening. "I think we've done a pretty good job with two county championships. We tied for a conference championship a year ago. I thought that was really big."

Before 2006, the Clovers had not won any county or conference championships in program history.

CHS principal Sonny Stoltz, who had no part in the decision not to renew Cook's contract, described the cause of the split as a difference of philosophies.

"Last night the board voted to take a different route with the girls' basketball program," Stoltz said. "They were interested in, maybe, a different approach with the philosophy of the lower levels.

"Last night they came together and enough of them decided it was time for a change," he continued. "We've had some success so it's really kind of hard for some people to understand. I think the philosophy of what we were doing and what they wanted were two opposite things at this time."

Phone messages left for five of the seven board members, as well as Superintendent Carrie Milner, were not returned on Tuesday evening.

Stoltz, who preceded Cook as varsity girls' coach, was extremely complimentary of the coach and the time he has devoted to CHS basketball.

"Bruce has been very loyal to Cloverdale High School. He's given a lot the last 10 to 12 years to girls' basketball," Stoltz said. "I know he would like to continue coaching, but obviously philosophies were a little different at this time."

Cook remains employed at Cloverdale Middle School as a sixth grade teacher. While the former coach expressed his disappointment, he also chose to focus on positive points of his five years at the helm.

"I wouldn't change anything and that's one thing that Coach (Sam) Brown and Coach (Curt) Cummings and I have said from the start, that we wanted to do things our way. If this kind of thing happened, at least we would know that we did things the way we wanted to do it," Cook said.

Brown and Cummings were not retained as assistant coaches.

Cook said he was told the decision was based on his handling of the lower levels of the program and "fundamentals." Given Cummings' track record at the junior varsity level, he did not understand this.

"There was concern about our fundamentals and some of the things we've done. But Curt Cummings has been a very good assistant coach for us over the last 10 years and he's won four of the last five county JV tournaments. I think he's done a very nice job doing that," Cook said.

He said the reasons remain unclear to him.

The coach did not seem to expect further answers, as he said there had been no communication from the board leading up to this decision.

"Nobody every came and talked to me, as far as a board member, to ever try and get any answers to any questions," he said. "We practice every morning at 7 o'clock and we play every Monday and Wednesday over at Cascade, so I'm pretty accessible if anyone wants to get a hold of me and meet with me. But that was never done."

At the same time, though, Cook said he understands the way things work. Coaches are retained on a year-by-year basis, and these things are part of life.

"I think with any coach it's inevitable that it's going to happen, sooner or later. At least we felt like we were OK with the way things had gone," he said.

Cook is trying to carry out of this experienced the same things he stressed to his players as a coach -- positivism and class.

"I always tell the girls when we get beat -- and when we win -- 'There's no substitute for class.' I think that's very important," Cook said. "If there were two things we always talked about, it was to run a class program and to always look for the positive.

"In the end, I think we got two things accomplished. We won, and we had some great memories when it was over," Cook continued. "Life will go on. In three months, it will be something else, but it's pretty important to me right now."

Comments
View 45 comments
Note: The nature of the Internet makes it impractical for our staff to review every comment. Please note that those who post comments on this website may do so using a screen name, which may or may not reflect a website user's actual name. Readers should be careful not to assign comments to real people who may have names similar to screen names. Refrain from obscenity in your comments, and to keep discussions civil, don't say anything in a way your grandmother would be ashamed to read.
Respond to this story