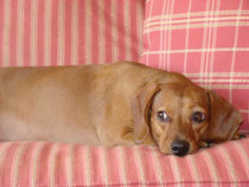 Phoebe, the brown-eyed beauty, has been chosen as a pet of the day by PetSmart. She was caught here resting after hearing about her debut on the www.petsmart.com Web site.

If her big brown eyes don't make you fall in love, her sweet friendly personality will.

Phoebe Whitehead may have four legs and a tail, but she could be America's sweetheart.

Phoebe has been chosen as the "Pet of the Day" by PetSmart and is featured today on the pet company's website.

The three-year old beauty was chosen from among hundreds of cats and dogs submitted by their owners to be a "Pet of the Day." Pet owners simply fill out a profile on their animal by answering a few simple questions such as breed, birth date and name.

The information is then uploaded along with favorite photos.

"I just created a profile for her and then entered her in the contest," said Phoebe's owner Brandy Whitehead.

PetSmart staff review the profiles and choose their favorite "Pet of the Day."

If you see them ask if they have a picture of their favorite girl. They proudly carry several.

Locally, you may have seen Phoebe compete in the annual pet contest for the Fourth of July Celebration in Greencastle.

Phoebe is a mix of a red-smooth dachshund and beagle. She is soft rust color and has big brown eyes and floppy ears.

When asked what she thought about all the fuss, Phoebes tilted her head coyly and yawned.

Anyone interested in checking out Phoebe's profile can go to www.petsmart.com.