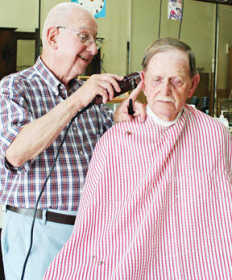 ROACHDALE -- Under a traditional barber's pole on main street Roachdale, one of Pete Noland's customers offers him a sample of his homegrown beets. Noland and his customer barter over how many beets are worth one haircut.

Noland has been cutting hair in his small hometown for nearly 62 years, keeping his barbershop as traditional as possible. Though the price of a haircut has risen from 65 cents to $9, not much else has changed about the shop that has been in business since at least 1904.

With two old-time barbers' chairs and other original dťcor, the barbershop strongly resembles the shop in the picture hanging on the wall. The picture, featuring a young Noland preparing to cut a customer's hair, was taken in 1946, the first year Noland started cutting hair.

"My father died just as I graduated high school," Noland said. "I decided then to go to barber school and keep this place going."

Noland's father, Pete Noland Sr., started out as a shoe shiner in the barbershop, going on to buy it in 1925. The family business has been a huge part of Noland's life, and he wants this tradition to continue for as long as possible.

"I will be cutting hair as long as I am able," Noland said. "I have no plans on retiring anytime soon."

Noland's 62 years in business have only been interrupted between 1950 to 1954 when he served in the U.S. Military.

As an honor for his time in business and service to the Roachdale community, Noland will serve as the grand marshal for the upcoming Summerfest parade. Noland will ride on the merchant's float, which will be barbershop themed.

"I will have one grandson sitting in the chair and I'll pretend to cut his hair." Noland said. "I'll have another grandson with a shoe shine chair shining shoes."

The float will also feature a washtub because baths used to be a service offered at Noland's Barbershop.

Noland said the most rewarding parts of the haircut business are the friends he makes, the people he meets, and the children he gives their first haircuts. One of these rewards also adds a challenge to Noland's profession.

"The hardest part is when the kids cry when I'm cutting their hair," Noland said.

Fred King, a customer of Noland's for more than 30 years, said Noland is a great barber in his opinion.

"People drive from Ladoga just to get their hair cut by Pete," King said.

Noland said that, like King, most of his customers are long time patrons.

Though Noland no longer offers shaves, which were 50 cents when he bought the shop, he still offers haircuts with 62 years of experience behind them.