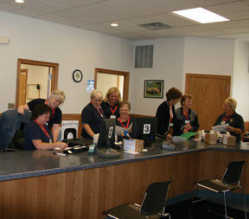 Thousands of Bureau of Motor Vehicle customers have rated their experience at BMV branches as either excellent, above average or satisfactory. The Putnam County BMV ranks in the top 97 percent for customer service.

While the Bureau has been maligned in the past for its many problems, the Putnam County Bureau has maintained a high standard of service to its customers.

Most people who spend time in the local BMV have excellent things to say about the service and staff who work there.

"Every time I have ever been in there the staff is always smiling and helpful. It makes what I thought would be a painful experience really pleasant," said Andy Rollins who recently renewed his driver's license.

Across the state, the average wait times declined in 2006 to less than nine minutes now and state officials are saying the agency has turned a corner.

This is partly due to new options for motorists, including appointments available at many branches, enhanced online services and 176 non-branch locations where at least some services are offered.

Indiana Governor Mitch Daniels called it the "turnaround of a century," during a recent town hall style meeting with about 300 BMV employees.

It was during this meeting that Daniels also announced the BMV won the 2008 Customer Service Excellence Award from the American Association of Motor Vehicle Administrators. The award is presented to the state agency with the most improved quality, convenience and accessibility of motor vehicle services.

Prior to 2005 the BMV had a reputation for low morale, long waits and scandal. Efforts to improve the agency drew criticism particularly when 20 license branches were closed.

Credit for the turnaround goes to Joel Silverman who was appointed by Daniels to take over the broken agency in 2005.

Top officials were replaced, a dress code was implemented and training for staff was intensified along with the closure of the 20 branches.

A year later the conversion to a new computer system caused more headaches as long lines developed, police were unable to access accurate driver records and county taxes were not distributed on time.

The public outcry was loud enough that Silverman later resigned but before he did--he began surveying the agency's customers.

When Silverman took over the agency morale was low, computer systems out of date, old record-keeping methods were still in use and the department was still reeling from a scam that included bogus visas and passports being used to acquire Indiana licenses.

Silverman put together a questionnaire that asked those coming into branches to rate staff friendliness, their ability to provide service and to rate their visit overall.

By 2006 the overall service was satisfactory or above at 84 percent. In 2007 it rose to 97 percent, dropped significantly during a time of computer problems and eventually rose back to its current 97 percent rating.

Part of the satisfaction, says current BMV Commissioner Ron Stiver, is the department's Web site. Customers can check current wait times at branches and receive a discount for renewing registrations online. They can set up accounts to conduct numerous transactions without ever entering the branch.

Putnam County residents speak in glowing terms of their branch located in Greencastle.

"The people here are always so nice and helpful. I don't mind coming in here at all anymore," said local resident Lucy Givens.

"I lived in Indianapolis for years before coming to this area. I hated going to the license branch. People were short and rude. But, I've never had anything but a good experience here," she added.