INDIANAPOLIS -- Pole sitter Jimmie Johnson did not lose a lead under green flag conditions all day on Sunday. So when Johnson had the lead on a restart with eight laps to go, second-place Carl Edwards was in trouble.

Johnson won his second race at the Brickyard in a disjointed 15th running of the race. 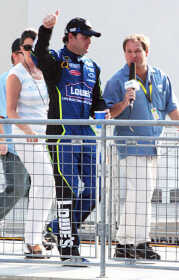 Jimmie Johnson acknowledges the crowd as he strolls to his press conference.

Johnson began the day in the lead and was there much of the day. He led eight times for 71 laps. Each of the seven times he lost the lead, it was due to caution. The car was truly dominant throughout the day.

On the lap 139 caution, he came out in ninth place, but made up the deficit in the final stop. Johnson's crew gave him a two-tire stop in six seconds that gave him the lead.

That was all he needed, as he held off Edwards for the last eight laps.

"I knew what we were setting up for," Johnson said. "I was worried the stop before that maybe we had to go two laps to win this thing. Chad called it perfectly. We had a great stop at the end."

Johnson also acknowledged that while the strategy at the end worked well, the win sprung from success over the course of the weekend.

"Great car. I just can't say enough about this race car all weekend," he said. It was a pleasure to drive, and it's because these guys have been working so hard."

The rest of the top five was Edwards in second, Denny Hamlin in third and Elliott Sadler in fourth.

Unfortunately for Johnson, it may not be his victory for which the 2008 race will be remembered. It will be the performance (or non-performance) of the tires.

The tires were the story for much of the day. As predicted after Saturday's practice session, the tires wore quickly in the early going, claiming a number of victims. Michael Waltrip, Kevin Harvick, Kurt Busch, Dale Earnhardt Jr. and Juan Montoya were all either out of the race or laps down following tire issues in the first 30 laps.

It did not stop there, though. All told, there were 11 cautions for 52 laps on the day. Between competition yellows for tire changes and a number of incidents, nearly all of the cautions were tire-related.

With all the planned and unplanned cautions accounting for nearly a third of the race, the man on the hot seat was Goodyear's Greg Stucker. While the problem seemed to be a combination of the Goodyear Eagles, the track surface and the Car of Tomorrow's first run at Indy, most of the attention was focused on the tires.

Jimmie Johnson takes a cool down lap after winning the Brickyard 400 Sunday. Johnson started on the pole and led 71 laps on the afternoon to get the win. With the win, Johnson moved into fourth place in the Spring Cup standings.

Late in the race, faced with more than his share of questions, Stucker said his company will move forward, trying to be solutions-oriented.

"This is the same compound we raced last year, and the wear improved over the course of the day to the point where we could run those full stops," Stucker said. "That didn't happen today, so we need to understand why.

"You sit and look at the day and then you try to look at what to do to fix it," he continued. "I don't think anybody likes to race like this, us included. We're going to try and do what we need to do to make it better. We'll probably test here before the end of this year so we can get a leg up here."

NASCAR Vice President of Competition Robin Pemberton emphasized that finding a solution is the task of the speedway, the series and the tire maker. Although the surface was abrasive, the cars have run successfully and Indy in the past.

"To put it on the surface wouldn't be fair," Pemberton said, adding that this is the first big problem in 15 races at Indianapolis.

The drivers with high finishes had to answer as many tire questions as race questions at day's end.

"I, personally, want to say to the fans that everybody was doing their best to make that a race. At least we got to run there at the end," Edwards said.

"The pay is the same. The trophy looks the same. I really don't give a damn if they race 10 laps at a time. It's frustrating, but it's the same fore everyone," he continued.

"The tires, I think, were good. The cars were just hard on them," Hamlin said. "I applaud NASCAR for not putting anyone else in danger by putting out those cautions."

"The thing I was concerned about was that as we were going there that NASCAR would say, 'Okay, you guys can go ahead and race the final 30 laps,' after we had had so many competition cautions," Knaus said. "They did the right thing by having us come down and do what we needed to do to get the tires on the cars so nobody had any problems and got hurt.

In the season points standings, the top three stayed the same. Leader Kyle Busch had a solid run, but never really figured in the lead, finishing 15th.

Dale Earnhardt Jr. remained in second with a 12th-place day. Jeff Burton stayed in third with his ninth-place finish.

Johnson overtook Edwards for fourth in points. Hamlin was the day's big winner in points, leaping from 12th to eighth.

Clint Bowyer jumped a postion to 12th and would currently be in the Chase for the Sprint Cup. Harvick fell four positions and is currently out of the Chase in 13th.