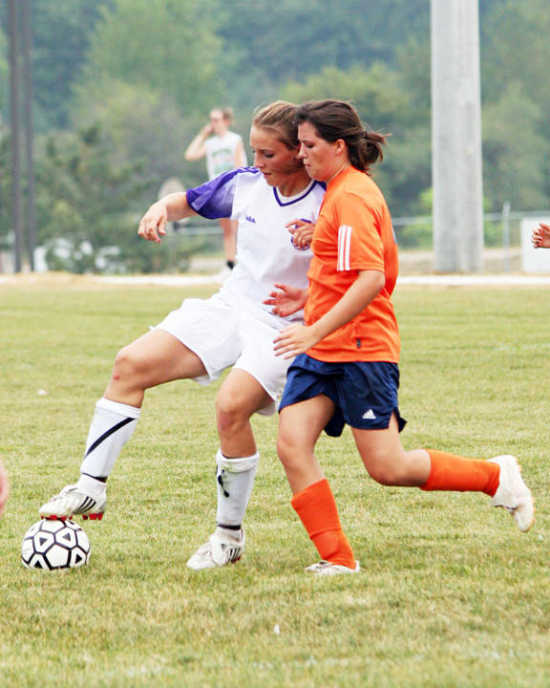 It was a busy night for North Putnam keeper Dakota Malayer. She faced 32 Greencastle shots on goal, allowing only two the skirt past. But that was enough for the Tiger Cubs to leave the field with a 2-0 victory.

After a scoreless first half, Greencastle's first strike came with 36:32 on the clock in the second half. Katie Farris slid around the Cougar defense and fired a shot past Malayer.

Greencastle faced a clogged goal for most of the game, which was something head coach Maurice McKee spotted and tried to bring to his squad's attention.

"They were out there in the play, but sometimes when you're outside looking in you see some things happening," McKee explained. "We knew Hannah was getting double-teamed. When she goes in double-teamed, you bring more people in and it gets really clustered in front of the goal and Dakota was cutting down all the shots."

Spencer had multiple shots on goal in the contest, but with 14.19 left in the second half, she finally found the back of the net, putting Greencastle final score on the board.

McKee noted that with the congestion in front of the net, it was difficult to open much of a shooting lane. Spencer pulled her defenders out and gave herself the opening she needed.

"Hannah remembered and pulled out that one time and pulled her defenders with her and turns around and opened the goal and that's what it took," McKee observed.

In the first half, the Cougars were relentless in their pursuit of GHS. Greencastle's McKee acknowledged after the game that he had talked to the team about passing the ball the previous night and in the first half they took it to heart. They seemed to put major emphasis on their passing game, but that's not to say they had abandon their shots.

The Tiger Cubs took multiple shots in the first half, but ran up against a wall in Malayer.

"We had 21 shots on goal with zero getting in the hole -- it was pretty frustrated," McKee said.

McKee was pleased with the amount of shots on goal by his team, but was not with their approach. GHS took shots from angles that diminished their strike zone. McKee also wanted his team to press the ball closer to the goal, utilizing their dribble, but in the first half, that didn't materialize.

"You don't keep taking the angle, once the first 10 don't go in; you need to try something different," McKee commented. "I tried to get them to dribble the ball in throughout the first half. They would dribble in most of the way, but then they would try a short shot, but it was right to the keeper. She did a really good job of defending her goal."

For the Cougars, the first half was exactly what they were hoping for. They neutralized one of the Tiger Cubs' major threats, Hannah Spencer, and kept themselves in the contest by attacking Greencastle. When asked about the play of his team in the first half, North Putnam head coach Willie Gaskins was more than pleased.

"It was excellent; we did exactly what we wanted to do," Gaskins said. "We wanted to try to shut Hannah Spencer down; we accomplished that for the most part. I went into the second half thinking the same thing, trying to get the same thing done. We did a good job of containing them.

"They had a lot of shots, but our keeper was on top. Good job to Dakota, she was busy tonight, she didn't get time to rest. Our whole defensive back did a very good job," he added.

Gaskins also commented that the team would be working on dribbling and light touches, noting that a lot of the passes were not where they needed to be.

Greencastle will next travel to Crawfordsville at 5 p.m. Monday, while the Cougars will host Owen Valley at 5 p.m. Tuesday.

Next match -- Greencastle will next travel to Crawfordsville at 5 p.m. Monday, while the Cougars will host Owen Valley at 5 p.m. Tuesday.