Candidate to bicycle his way through District 44

By IVY JACKSON, for the BannerGraphic 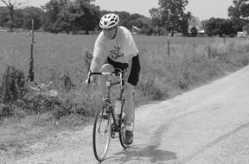 Thomas hits the road on his bicycle

An avid tour bicycling rider, Amos Thomas is ready to hit the campaign trail with his Schwinn Voyageur.

"This is a great way to get out and meet people on a personal basis and see the communities that comprise the district," Thomas told The Brazil Times about his upcoming plans for three bicycle rides through District 44. "After this, I will know the territory and the district much better because I've ridden through it."

Thomas became interested in tour bicycling when he joined one of his sons for a ride with a youth group 24 years ago. Riding with a full pack, excluding food, for up to 75 miles a day, several days in a row, he has seen much of the Midwest from a bicycle seat.

"Bicycling is a great way to get away from the technological world and relax," Thomas, 78, said. "Outside of walking, it is the best way to see the country around us."

Thomas said the ride would also let his constituents know that he's healthy and ready to go to work for them.

In December 2007, an outpatient surgical procedure to relieve pressure on Thomas' spinal cord had some complications that required an additional surgery and medical treatment.

"I've had a lot of people come up and ask how I'm doing, thinking I was in a lot worse shape than I was," Thomas said. "I was still recovering up until June, but I'm back now, healthy as ever and I'm ready to go to work."

Although Indiana is no longer ranked among the top 10 "fattest states" in the nation, a new study by the Trust for America's Health reports that 27.5 percent of Hoosier adults are considered by health officials to be obese.

Thomas encourages people of all ages looking for a way to exercise to consider bicycling. Which is why he is inviting citizens to join him during the upcoming three rides in September.

"Tour bicycling is the best way I know to get exercise and stay in shape," Thomas said. "There's nothing quite like it."

Thomas said he has been able to maintain his body weight and bring his cholesterol down by participating in the sport.

"I believe it's allowed me to be in the great mental and physical shape that I am," he said.

"I really hope that people come out during the rides to meet with me, ask questions and voice their concerns. And, anyone who wants to is welcome to ride along with us, but they will need a 10-speed to keep up."

Safety is also a concern for Thomas, which is why he wants any riders planning to participate to make sure they have their helmets and safety equipment.

"We're not racing anywhere, but we do have a lot of ground to cover," he said. "We want to do it safely."

Excited about his unique campaign trail, Thomas is looking forward to hitting the road.

"I an not ready to retire. I don't want to retire," he said. "I can't be a couch potato. I'm looking forward to the future."

Ivy Jackson is a writer for The Brazil Times, sister newspaper of the Banner Graphic