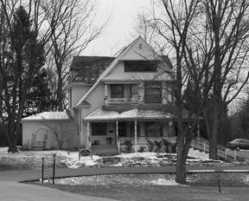 State fire investigators at Greencastle's Victorian Day Spa where a Tuesday fire caused an estimated $50,000 in damage say the blaze was no accident.

"I don't have a lot of information right now, but the State Fire Marshal was down today and he said they have determined the fire was arson," Police Chief Tom Sutherlin told the Banner Graphic Wednesday night.

He also said the fire marshal had taken some items into evidence and would be examining them back at the lab. He did not know how long the examination would take.

Firefighters from Greencastle and Cloverdale Township responded to the business located on South Jackson Street at around 9:30 p.m. Tuesday after someone reported seeing flames coming from the structure.

Meanwhile the search for suspects in the fire is on. Greencastle Police Detective Randy Seipel is conducting the investigation.

"We don't have any leads, anything to go on right now," Sutherlin said.

He encouraged anyone with information to contact the Greencastle Police Department at 653-2925. There is a $5,000 reward for anyone who provides information leading to the arrest and conviction of a suspect in this case.