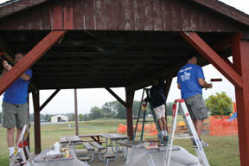 Rick Alexander, Jim Eystad and Cheryl Baxter from Wal-Mart Distribution were busy painting one of the shelters at Big Walnut Sports Park as part of the Day of Caring sponsored by the Putnam County United Way Friday. In the background is a new playground set to open soon.

Local children will soon have a new place to play, as workers are finishing up the installation a new playground at Big Walnut Community Park.

Greencastle Parks and Recreation Director Rod Weinschenk said wet weather in the spring hampered efforts to get the playground installed but that the job should be completed next week. Workers were waiting on the arrival of a slide to complete the installation, he said.

The playground is part of a major capital improvement project nearing completion at the south end of the sports park, which was funded by a Land and Water Conservation Grant given last year to the park board by the state. 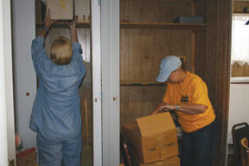 Kathie Skeel and Linda Merkel were busy organizing shelves in the Putnam County Red Cross Building during the United Way's Day of Caring. Seven groups were working on various projects all over the county on Friday.

On Friday, the park benefited from many helping hands taking part in the United Way's Day of Caring. Volunteers applied a fresh coat of red paint to the shelter houses at the south end of the park. They also applied mulch to several landscaping areas in the park.