For a coaching staff dealing with a young team, it's easy to deal in moral victories. When the wins aren't piling up, you try to find the little improvements in losses that show signs of progress. 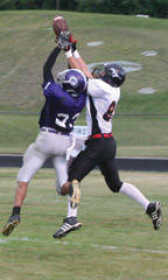 While the Greencastle football team showed some of these signs Friday against Edgewood, coach Mike Meyer would have none of it. After the Tiger Cubs' 39-26 loss, he knew his squad could have, even should have, won the game. He made the point clear to his team after the game.

"Edgewood was a good football team and they have an outstanding player. We missed opportunities. We let things go. We missed tackles. We dropped the football. We missed assignments. We had the opportunity to win the ballgame and we didn't take advantage of it," Meyer said.

The Tiger Cubs (1-2, 1-1 WCC) missed countless tackles on the night, particularly in the first half. The Mustang rushers ran through the GHS defense to the tune of 432 yards.

That fact, coupled with GHS's drive-killing drops, made it a wonder that GHS was in the game at all.

The Mustangs (2-1, 1-0 WIC) struck quickly in the first quarter, as quarterback Josh Collier picked up 60 yards and a touchdown on just two carries in the opening drive. A missed extra point by J.T. Finch kept the Mustang lead at 6-0.

Greencastle came back, though, going 35 yards in 11 plays on the way to a 33-yard field goal by Buzz Deer, making the score 6-3.

In the second quarter, though, the missed tackles really began to take a toll. On their first two drives of the quarter, the Mustangs kept the ball on the ground, gaining 67 yards on 10 carries. Both drives ended with Kyle Williams touchdowns and Finch extra points.

It wasn't that the Tiger Cubs weren't getting their hands on Collier and Williams, they just couldn't bring them down.

The GHS offense, for its part, was also struggling. Quarterback Graham Shuee threw a number of nice passes that his receivers could simply not come down with. The issue killed the first two drives of the quarter and led to three-and-outs.

On the third drive of the frame, the offense hit its stride, as Shuee was 3-for-3 for 39 yards and a 25-yard TD strike to Ashton Marshall. The Deer PAT drew the Cubs within 10 with only 1:30 remaining until the half.

But then trouble struck again. On the ensuing kickoff, the Cubs tried an onside kick. Although Deer had the ball in his hands at one point, the Mustangs recovered.

Staring at great field position, they wasted no time. After a short completion to Williams, Collier found Finch on a 49-yard touchdown pass, making the score 27-10 heading into the half.

In the third quarter, the GHS defense continued to struggle from a yardage standpoint. However, the Mustangs only managed to find the end zone once, as Williams scored his third touchdown from five yards out with 1:12 to go in the quarter.

Early in the fourth, the Tiger Cubs had a couple of nice plays to make it a ballgame again. Taking the field for the first time in the game, the Mustang's punt unit looked a little rusty, as the snap sailed over Collier's head and out of the back of the end zone. The safety made it 33-12.

The ensuing free kick gave GHS first-and-10 from their own 42.

On the very first play of the drive, Shuee found Marshall behind the Mustang defense, and the senior sprinted all the way to a 58-yard touchdown, his second scoring grab of the night. Deer's kick made it 33-12 with 11:03 remaining.

After the defense forced another Edgewood punt, Greencastle looked ready to roll again, if not for the injury bug biting again. On an incomplete pass attempt, Shuee was brought down hard and did not get up for a couple of minutes.

Although the senior walked off the field, he did not return to the game.

It was a problem the Tiger Cubs could ill-afford, particularly in the backfield. Starting running back Jordan Hickam went down last week at Speedway and was still out Friday. Likewise, replacement Patrick Richardson had gone down earlier on Friday. The outlooks are mixed for the trio, but Meyer remains positive.

"Hopefully we get Richardson back. I think Graham will be back. Hickam is down for a while, I think," he said. "We'll see what happens. I haven't got all the reports yet, but if they're ready to play, they'll be there to play." 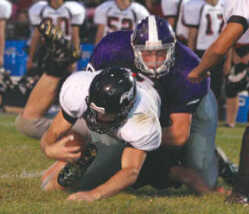 In Shuee's absence, the offense struggled. His replacement Tanner Battin was 2-for-5 for 21 yards in the game's final drive, but the offense could not find the end zone again.

Edgewood, on the other hand, had one more score in them, as Williams ran for his fourth touchdown of the night with 3:29 remaining.

The final highlight of the night came from the Greencastle defense. With Edgewood trying to run out the clock, backup QB Kevin Archer fumbled on a rush attempt. Senior defensive lineman Kyle Buchanan scooped up the ball and ran 45 yards for the score.

Deer's last kick of the evening brought the game to it's 39-26 final score.

After the game, Meyer knew his team had lost to a quality opponent, but he still could not get over the chances they had squandered.

"We saw some good things on offense that we hadn't seen. But, again, we had other chances -- missed tackles, dropped footballs, missed assignments. Those are problems and until we can correct that, it's going to be a bumpy ride," he concluded.