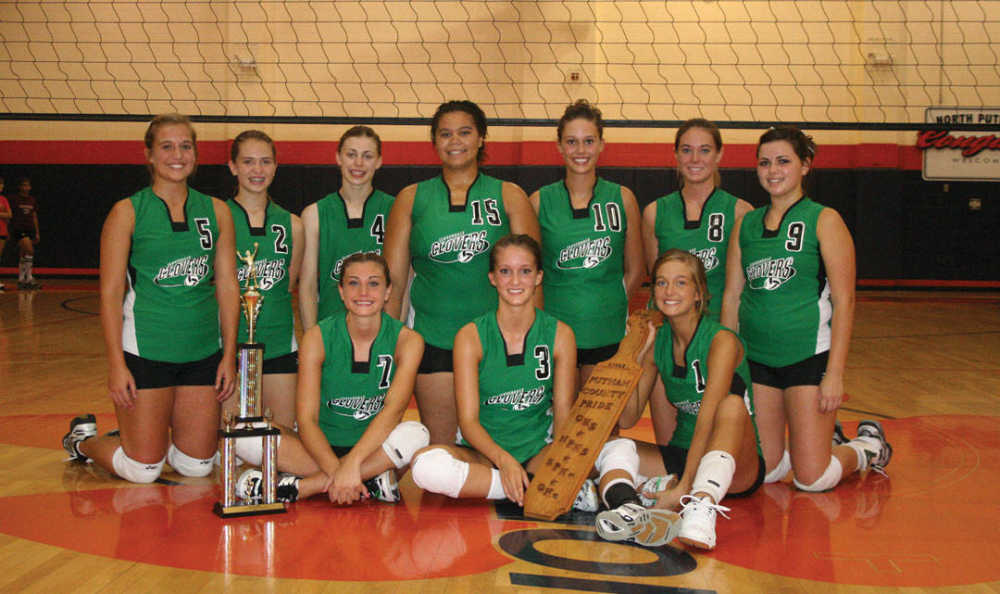 That's the word you could use to describe the career of Cloverdale's senior class in Putnam County volleyball tournaments. They won County twice in middle school. They won JV County as freshmen and as sophomores. Now they have won back-to-back varsity County Championships in their junior and senior years.

"I'm real proud of the girls. For the seniors, this is their sixth one in a row. They have won every (County) tournament since they were in the seventh grade," Clover coach Kathy Moore said. "That's a pretty phenomenal thing to do."

With the exception of Kristin McCammon, who played varsity as a sophomore, every one of the seven Cloverdale seniors closes her career 6-for-6 at county.

For Cloverdale, the championship match was largely about playing their own game. After struggling with South Putnam in the opening round, they took control of each game of the championship match early. In game one, they opened up an early 10-3 lead and basically maintained to a 25-19 win. In game two, it was more of the same, as they jumped out 8-2, extended to 18-9, and ultimately won 25-12 on three straight points from Kaileigh Sparks.

The two championships in a row are nice for a program that had not won county before 2007.

"It's a great feeling to be able to defend the County Title," Moore said. "I felt the entire team contributed toward the title and I was pleased with their effort. There were times today when we were down by several points and fought our way back. That is hard to do."

"We are further than what they went last year, so that's an improvement. We have improved; we are improving. It didn't feel like anybody thought at any time that we would be in the championship, so I'm glad for the girls in that," Schreiber said.

For the Clovers, Sparks' service led the way, as she served for eight points and two aces. She also led the way with eight assists.

McCammon had 16 digs and two aces. At the net, Allie Franklin had five kills, and Elizabeth Cheatham had 13 blocks.

For the Cougars, Carlye McGaughey had two points, both aces. Taylor Alles had five kills, and Megan Gray had eight assists.

One side story to the championship matchup was the relationship between the two coaches. Schreiber not only coached under Moore in 2007, but she also played for Moore as an eighth grader. Being able to coach against someone who followed her career choice was an honor for Moore.

"I can't tell you how thrilled I am to be able to coach against a former player and coach of mine. That's fun," Moore said. "It's a real honor to have somebody follow and also do what you do. I think that's a real treat."

The moment was not lost on Schreiber, either, as she praised the woman who was and remains a mentor.

"She's great. She's helped me so much this year and last year. She's a great person, all around," Schreiber said. "She's easy to work with, deal with and coach against. She's an all-around good person."

The road each team took to the finals may have provided the most compelling matches of the day, as each team had to come from behind to make the championship.

In the first match, North defeated Greencastle 21-25, 25-19, 16-14. The turning point for the Cougars seemed to come in the first game. Facing game point at 24-17, North ran off four straight points to pull within three.

Although the Tiger Cubs (2-12, 0-2 WCC) ultimately won the first game, North seemed to carry the momentum they gained late into the rest of the match.

"This was a tough loss for us. I was happy with our overall play," GHS coach Trish Lowe said.

With the final game of the match so close, Schreiber thought her team just dug deep and decided they wanted it in the end.

"They fought hard at the end. They wanted, and they deserved it. I'm proud of them," Schreiber said.

In the second preliminary, Cloverdale had to come back on a South Putnam squad that seemed in control of the match most of the way. The Clovers overcame an 11-6 deficit in game three to win 21-25, 25-21, 15-13.

Coach Jill Newton could not hide her disappointment in the Eagles (5-6) following their game three collapse.

These sorts of struggles have troubled the Eagles this season, and Newton is still looking for an answer.

"We work on it in practice. We talk about it, and they know what they need to do to win. But when it comes down to it, I can't play the game for them," Newton said.

For her part, Moore had to give South credit for maintaining control most of the match.

"The first match against South Putnam, we didn't pass very well, and that's to South Putnam's credit. They were serving very well, and hitting at us extremely well, and we just weren't getting the ball up," Moore said. "They're very strong, and I have to give them a lot of credit."

At day's end, though, it was time for the Clovers to celebrate, and Moore was happy about that.

"It was a fun tournament for us, and we appreciate our fans for their support; a special thank you to the Cloverdale fire and police departments for their escort back home," Moore said.

In the JV tourney, South Putnam kept its undefeated season alive by defeating Greencastle in the finals, 25-22, 25-15.

First Round -- Match One