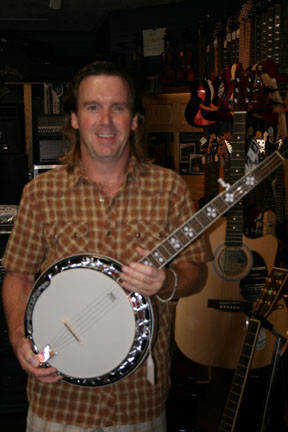 For five years, Dan Brush wanted to buy a music store. Last year things came together for him and he purchased the Greencastle Music Center from Rod Kersey. In early November he opened his new store on Indianapolis Road.

"I've been a musician all my life. Always loved it. I'm a Christian and I pray over important things. I prayed and it seems like a door just opened," said Brush.

After being a floor covering installer for 25 years, Brush decided he needed a change.

"I just couldn't take it any more. I guess I was just getting too old," he laughed.

The music business wasn't all that new to Brush. He worked for Kersey for seven years part time at the music store before purchasing it.

"The past year has been great. We carry more products than the old store did including instruments for the local schools. Our inventory has increased 4-5 times over the old store," he said.

"Right now, this is the only place you can get TGL's CD. We try to sell CD's for most of the local bands. We don't charge a commission or anything," said Brush.

"It's been great. I have met all kinds of musicians from DePauw to local high school kids. We try to do everything we can to be part of and to support the local music scene," he added.

They also repair instruments at the store. Will Fowler who works with Brush does most of the repair work. The two men also build all types of instruments.

And, Brush plays the banjo himself. And, tunes pianos.

A lifelong resident of Putnam County, Brush graduated from Greencastle High School. His wife Becky is the accountant for the store and works a couple of days a week.

Brush told an interesting story about meeting his wife. Becky moved her after graduating from college to be with her sister. She went to work for Brush's father who was the owner of HBG Insurance.

"My dad tried to be a matchmaker and keep trying to introduce me to Becky and I resisted. Later on I met her on my own accidentally," laughed Brush. Nine months later the two were married and have been married for 22 years.