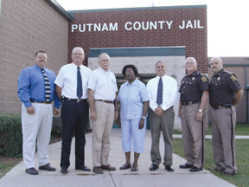 New members have been appointed to serve on the re-organized Merit Board of the Putnam County Sheriff's Department.

Dorothy Brown and Jerry Birt join long-time members Charlie Roach, Larry Sutton and Bill Newgent in sitting on the board that oversees the pension program, promotions, hiring and discipline for the sheriff's department. The five board members took their oaths of office Sept. 23.

Two of the board members -- Roach and Newgent -- were appointed by the deputies as their representatives, while Sheriff Steve Fenwick appointed Brown, Birt and Sutton.

In taking over the department as recently appointed sheriff, Fenwick said, regular meetings of the merit board are important to oversee the financial health of the department's pension fund. While only two past deputies are now receiving pensions from the fund, the department has at least four officers who are approaching retirement eligibility.

The merit board also reviews promotions, hiring and disciplinary action of merit deputies within the department.

During its meeting Tuesday, the board members decided that Roach will continue as president, with Brown as secretary.

Roach has served several years on the board, being first appointed in the 1980s by then-Sheriff Gerry Hoffa. He also served on the board during part of Sheriff Richard Lyon's two terms in office, and returned to board under former Sheriff Tom Helmer. Roach is retired from IBM Corp. and Charming Shoppes. He is a former volunteer and past chief of the Cloverdale Township Volunteer Fire Department. He and wife Rebecca have five children, 10 grandchildren and several great-grandchildren.

Newgent has served at least 14 years on the merit board. He has more than 20 years experience in emergency services, and has been an officer in the Greencastle Fire Department for several years. He and wife Tammy have two children, Jonathan and Nicole.

Sutton has served close to 14 years on the board. He is retired from the communications department at DePauw University, and is active in Kiwanis and the Putnam County Playhouse. He is also chairman of the Putnam County Republicans. He and wife Patricia "Skip" have two children and one grandchild.

Birt is new to the merit board. He is a lifelong farmer and county native. He and wife Karen are the parents of Kara, who is a freshman at Greencastle High School, Kyle, who is a senior at Rose-Hulman Institute, Kayla, who is a sophomore at Taylor University, and Kacie, who along with husband Luke and son Sterling are missionaries in Japan.

Brown is also new to the board. She is a retired educator, former Greencastle school board member, and is active in Kiwanis. She is now house mother for Phi Kappa Psi fraternity at DePauw. She has two daughters and several grandchildren, and one of her daughters is an officer for the DePauw police department

The merit board has set its meetings for 6:30 p.m. of the fourth Monday of each month at the sheriff's department. The next meeting will be on Oct. 27.