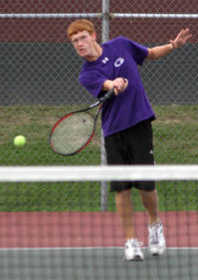 BRAZIL -- The Greencastle tennis team opened sectional play looking for a bit of revenge against the host Northview Knights.

The Tiger Cubs had fallen to the Knights several weeks ago on Greencastle's home court and were hoping to return the favor in the opening round of the Northview Sectional.

Number one singles player, David Cath, wasn't available in the first match-up, but returned for Wednesday's match to play at No. 1 singles.

Unfortunately for the Tiger Cubs, the final result was much the same as the first time around as Northview got quick vicies from its doubles teams and No. 3 singles to win a 5-0 decision and advance to the sectional title match.

"Northview has got some nice players," said Greencastle coach Bart Spencer. "You can tell they have been playing a lot of tennis for a long time."

The two best battles came at the No. 1 and No. 2 singles spots as Catch took on Austin Akers for Northview and Greencastle senior Ty Fauvergue squared off with Clint Reynolds.

Cath fell behind 4-1 in the opening set, but rallied to get within 5-3 before Akers was able to take the lead. Cath then held an early 1-0 lead and was still up 2-1 before Akers rallied.

Akers tied the game on several long, successful rallies to advance to 2-2 and then slipped ahead 4-3 over Cath.

Northview's senior continued the pressure and eventually won the final two points for the singles vicy.

At No. 2, Fauvergue was within 4-3 in each of the two sets before Reynolds' strong serve and some unforced errors by the Greencastle senior proved too problematic to overcome.

Reynolds was able to gain 6-3 wins in each of the two sets.

Greencastle's only other senior, Logan Grzesiek, fell in a 6-1, 6-0 contest to Northview's Carson Kleiber.

"Those guys have represented the school well in their career," said Spencer of his two seniors. "They are great students and I'm proud of them."

Doubles play was also dominated by the Knights, who got a 6-1, 6-0 win at No. 1 as Caleb Mershon and Matt Nodley teamed to defeat Greencastle's Vic Ness and Joey Kass. At No. 2 doubles Dustin York and Cy Spencer teamed together against Northview's Caleb Andrews and Joey Thomas, but fell via a 6-0, 6-0 decision.

Greencastle ends the season at 3-9 overall.