ROACHDALE -- In the opening game of Sectional #30, North Putnam left no doubt that they are the No. 1 ranked team in Indiana. Coming into the much-hyped rematch with the Eagles, North Putnam came out on fire, ultimately defeating South Putnam 35-0.

North Putnam received the opening kickoff and showed the Eagles what they could expect on the night -- a major dose of senior fullback Griffen Dahlstrom. In their opening drive that covered 73 yard, Dahlstrom accounted for 56 of said yards, but it was a touchdown strike from Scott Hunt to Kyle Adams that put the Cougars on the board with 7:35 remaining. 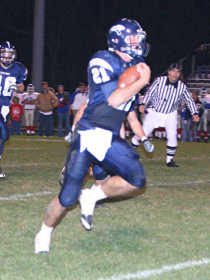 Griffen Dahlstrom races down the field during the Cougars' 35-0 win over South Putnam. Dahlstrom rushed for 247 yards on 23 carries.

Following a South Putnam three-and-out, Dahlstrom picked up right where he had left off.

On the first play of their second drive, Dahlstrom slashed through and at times ran over the Eagles defense for 47 yards. He found the endzone three plays later, scoring on a two-yard plunge, putting North up 14-0.

"You know man, we ran into a buzzsaw," Eagles head coach Troy Burgess said following the game. "There's a reason why that team is ranked No. 1 in the state. They're good. That's a very, very good football team. Our kids played their hearts out. I'm proud of our kids, I wouldn't trade a thing. We worked hard for this, we prepared -- the better team won the football game. That's not anything against our kids. If we played them again, they might still win, but our kids -- I wouldn't change a thing.

"Our kids played hard, they fought, I'm proud of them, but you have to give North Putnam a lot of credit," he added.

South Putnam was only able muster six plays from scrimmage in the opening quarter. Clearly it was going to be a tough night.

Their fortunes seemed to tur around when the Cougars fumbled the ball at the end of the first quarter, but South coughed up the ball two plays later, giving control back to the Cougars.

The Eagles put together a drive to end the half and moved the ball down the field through the air. Quarterback Hunter Edwards completed two passes for 21 yards, but his long bomb toward the endzone was swiped by the Cougars' Kyle Alcorn to end the half.

Dahlstrom racked up 137 yards in the first half and put North Putnam clearly in the driver's seat. Head coach Greg Barrett thought his team came out like they had discussed throughout the week and set to the task at hand.

"I thought we played extremely hard and we focused -- we were a disciplined team out there tonight," Barrett said. "We came out from the start and preached that. We knew if we gave them a chance, they were going to bring it to us. We talked about that all week long and I thought we came out and executed. We ran really well to the edge tonight. Of course Griffen had a great game and we blocked well." 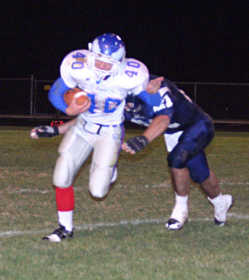 The Eagles got a great return from Drew Cash to begin the second half, but were unable to capitalize on it. That was the story of South Putnam's night. As soon as they put together a great play, a bad play befell them, leaving them scrambling all evening.

North Putnam administered another lethal dose of No. 21 (Dahlstrom) on their ensuing possession. Three touches, 78 yards and a score -- it doesn't get more efficient than that. The Cougars took a 21-0 advantage with 7:15 in the third on the touchdown.

North added another score in the third on a Hunt one-yard push and another in the fourth as Darr Boruff took the ball in from three yards out. After a two-point conversion, North Putnam walked from the field with the win.

Dahlstrom owned the night, rushing 23 times for 247 yards and two touchdowns. Burgess knew coming into the contest that Dahlstrom and key members of the Cougars line would be a huge factor.

"I said going into it, you'd better account for No. 65 (Seth Vondersaar) on defense and you better know where No. 21 (Dahlstrom) is as soon as he walks out of the looker room," he said. "Our kids knew where they were, we tried, we worked our hearts out, and we did a good job of that. They've just good a very good football team. Greg, like I said, I've got so much respect for him and the whole staff and they just do a super job.

"I'm proud of my kids, I wouldn't trade my kids for anything," Burgess said.

Defense is something the Cougars pride themselves on and the played an impressive opening sectional game Friday night. In 10 games this season, the North Putnam defense is giving up only 5.4 point per contest.

"Defensively, we had another outstanding game," Barrett said. "They played great and like we said earlier in the year, we talked about being one heartbeat and that defense is definitely one heartbeat that unit right there. They've done great all year. Next week is going to be a challenge."

South Putnam ends the season with a 3-7 record.

North Putnam will travel to Speedway for a 7 p.m. kickoff Friday in the semifinal of Sectional #30.

Next game -- North Putnam will travel to Speedway in the Sectional #30 semifinal at 7 p.m. Friday.