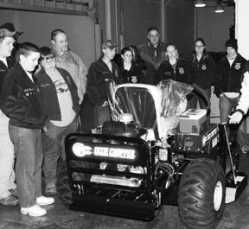 Members of the largest agriculture-related youth organization in America visited the home of the "World's Fastest Lawn Mower" recently.

With more than 50,000 FFA members visiting Indianapolis for their national convention beginning Oct. 21, it was not surprising that some of them would find their way to the Dixie Chopper facilities for a tour.

Two busloads of FFA members from four states arrived Wednesday, Oct. 22, visiting the Fillmore headquarters and fabrication facility as well as the assembly plant in Greencastle.

"They were real excited to be here and asked some really good questions," National Sales Administrator Darren Hughes noted.

"And every one of them left here wearing a Dixie Chopper hat."

"We had 100 FFA kids and advisers," Hughes said, noting that 50 alone represented Alabama -- appropriately enough, from deep in the heart of Dixie.

"Ronnie Spencer did a great job of explaining each station to them and what was going on there." Hughes praised.

At the conclusion of the tour, Hughes demonstrated the Silver Eagle, Classic and Dixie Diesel for the FFA group

"They all wanted to hear the diesel," he said. "They were big engine guys."

And eternal optimists, it appears.

"A bunch of them said they wanted a Dixie Chopper for Christmas," Hughes added.

More than 51,000 young people from across the country took part in the National FFA Convention in downtown Indianapolis Oct. 21-25. It is the nation's largest youth convention and Indianapolis' largest convention of any kind.

The National FFA Organization serves a half-million student members preparing for leadership and careers in the science, business and technology of agriculture with 7,439 chapters in all 50 states, Puerto Rico and the Virgin Islands.