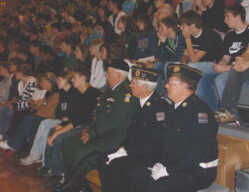 Three veterans sit among the Cloverale students at Tuesday's program.

CLOVERDALE -- Cloverdale High School held its Veterans Day program in honor of all the men and women who previously or are currently serving our country.

The Emerald Command Band played the "American Salute" as the audience entered the gymnasium Tuesday.

The program included Veterans Day poetry read by James Green; a brief history on "Taps" by Lincoln Gaston; and a performance of "Taps" by Mark Tyler and Mimi Short, both members of the Emerald Command Band, while the congregation of students and visitors stood to honor the most recognized military bugle call.

Lieutenant Colonel Dan Hodgkiss of the U.S. Air Force gave a short presentation during the program. He shared a video capturing the essence of what it means to serve the country, including the Airman's creed.

He shared stories of soldiers and the pride it brought them to serve.

Veterans Day began as Armistice Day in 1919, when President Wilson proclaimed a day to be set aside and "filled with solemn pride in the heroism of those who died in the country's service and with gratitude for the victory."

The original concept for the celebration was for the suspension of business for a two-minute period at 11 a.m. with the day also marked by parades and public meetings.

President Eisenhower legally changed the name to Veterans Day in 1954.

Congress passed the Monday Holiday Law, which established the fourth Monday in October as the new date for Veterans Day in 1968. Legislation passed to revert Federal observance to Nov. 11 in 1975, when 46 states continued to commemorate the holiday in November.