BAINBRIDGE -- Thanksgiving came a little early for the four first grade classes at Bainbridge Elementary School as they celebrated the holiday with their grandparents on Tuesday and Wednesday. 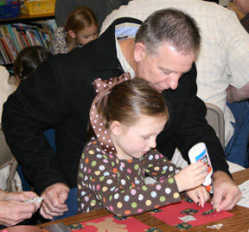 Kids recited pilgrim trivia; read a Grandma and Grandpa poem that had lines like, "My grandpa is fat, but not so fat. My other grandpa is tall and he plays basketball."

They performed the play, "The First Thanksgiving" which is all about five fat turkeys who hid in a tree and didn't get eaten for Thanksgiving.

The highlight of the event was the making of quilt squares by each student with their grandparents.

All the squares were collected and will be put together to make a paper quilt that will hang in the hallway next week and then go home with the students as Christmas ornaments.

Kids learned about quilts from their teachers. Nana Rising brought in a quilt her grandmother made in 1899 when she was just nine years old. She talked to students about making quilts and preserving memories by using pieces of clothing for squares.

Rising told grandparents that her students were astonished that there were no video games or cell phones when she was a student.

"I know most of you went to school when I did. I told the kids we did have electricity," she laughed.

Kids wrote stories about their grandparents and made lists about what they liked best about them.

"The thing the kids write and talk about the most are their grandparents and pets," said Rising.

The event ended with muffins and juice. It was the perfect Thanksgiving.