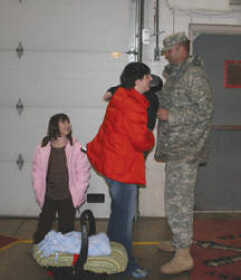 It was a cold, wet, icy homecoming, but it certainly warmed the hearts of some local soldiers and their families Monday evening.

While their progress from Camp Atterbury was slowed by the icy roads, the soldiers never doubted they would get back to see their families.

"There wouldn't be enough snow to keep any of us from coming home," said Spc. David Walker. "That's the first time any of us have seen snow in over a year."

The soldiers have been gone since Jan. 2, so the weather is roughly the same as what they left in Indiana almost a year ago. However, they said they'd take the cold over Iraq's dust and sand any day.

Spc. Kenny Boler had a snowball fight with his granddaughter outside the armory. He had to say getting hit with snow beat the alternative.

"It's great. I got snow thrown at me -- no dust, just snow and cold," Boler said. "The snow and cold you can get away from, but the dust you can't."

The members of Alpha Battery spent most of their time doing convoy security in Iraq. According to Matthew Emmerich, their convoy lines supplied approximately 70 percent of the goods to northern Iraq.

While the soldiers were all happy and relieved to return, they also expressed pride in what they were part of in the Middle East.

"It's a good experience," Boler said. "It's quieted down a bunch over there."

But they will find things even better back home, especially with the holidays just around the corner.

"It's lovely. I'm thankful he's home," said Walker's wife Courtney. "It's the best Christmas present you could ever have."

"It feels really good to be back with the family and get things back to normal," Spc. Walker agreed.