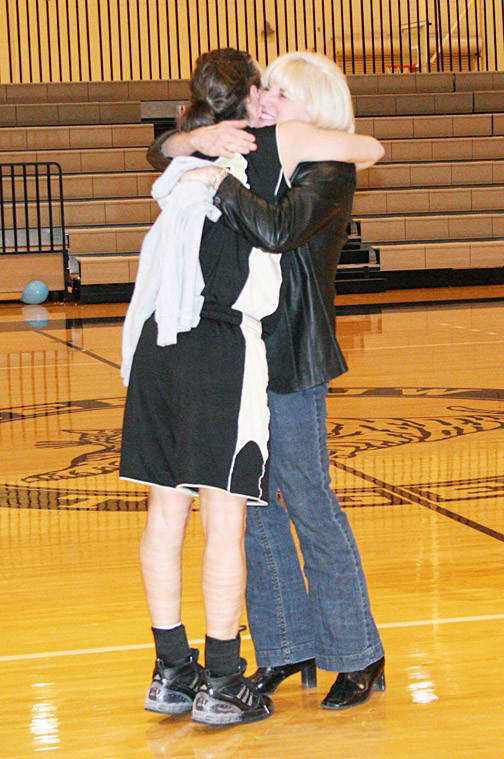 Cassie Pruzin receives a hug from Amy Hasbrook's mother Barb after being announced as an All-Tournament selection.

It wasn't easy, but it was a win. DePauw withstood a late charge from the Trine Thunder to go 2-0 in the Amy Hasbrook Memorial Classic Monday.

"They definitely had us on our heels," DPU head coach Kris Huffman said. "I think we had a defensive possession that was pretty good and got us going again. You could see the pep come back into their step and it was nice to have that change in momentum -- we needed it."

The afternoon began with the Tiger players crossing the court, blue balloons in hand, and placing them in the bleachers in honor of former player Amy Hasbrook.

Hasbrook was a 2000 graduate of DePauw who passed away in a house fire on Feb. 4, 2002. A three-year starter for the Tigers, Hasbrook has been described by Huffman as one of the fiercest competitors she's ever seen.

After the players returned to the sideline, it was time to get down to business and it didn't take them long.

DePauw jumped out to a 7-0 lead and went on to lead by as much as 11 as the first half came to a close. A bucket from Trine's Sarah Howe cut the lead to nine at 32-23 as the teams ended the half.

The Tigers would surge in the second half, but have to fight to the finish to collect their fifth straight win.

Nobody hit the court hotter in the second half than senior Cassie Pruzin. Pruzin connected on three of her four three pointers on the day in the half and went on to lead the Tigers with 18 points.

DePauw grew its lead to 18 when Danielle Boraz hit a bucket with 13:18 remaining, but at the 5:49 mark Ashley McClendon's basket had cut the Tiger lead to four 54-50.

Hoops from Emily Marshall, Andrea Travelstead and Brianna Frigerio helped DPU push its lead back to 13 and put the game out of reach, with DePauw coming away with the 64-54 victory. 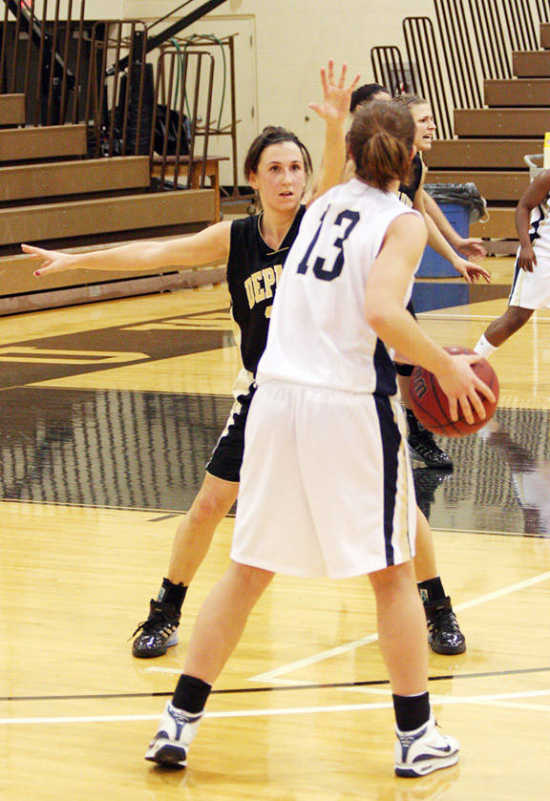 Senior Cassie Pruzin keeps her eyes on Trine's Sarah Howe during the second half of Monday's 64-54 win.

With only two seniors on its squad, DePauw is looking at its youth to play beyond their years. So far, they are living up to those expectations and Huffman is hoping the best is yet to come.

"We're asking some really young players to be important pieces of our team and they've handled the challenge well," Huffman commented. "We don't get enough practice, we don't get enough reps; all those things coaches feel, but they're a fun group to coach and I'm excited to see how good we can be in the end."

If the event wasn't already an emotionally-charge affair, Amy Hasbrook's parents Dan and Barb were on hand to speak of their love of their daughter and what an event such as the Memorial Classic means to them. They also helped announced the All-tournament team.

When Pruzin was announced as an All-Tournament selection, a smiling Barb Hasbrook greeted her with a hug at center court.

The team retreated to the locker room after the contest, with the Hasbrooks accompanying them. Huffman acknowledged what in meant to have them at the event and stressed what legacy their daughter will have within the DePauw basketball program.

"There were some tears in the locker room as they were hearing stories about Amy and meeting her parents," Huffman said. "It's priceless what just happened today. She's part of our basketball family and will always be and so it's nice that some of these new faces know part of our history."

DePauw is in the midst of an eight-game home stand, which is something Huffman feels really good about.

"It's nice to be at home, I'll have to admit. We've been on the road quite a bit," she said. "We're still trying to find ourselves; we're a young team and we don't have all the answers yet. I like how hard this team is working and how they're sticking together and I think that can mean some good things in the future."

The Tigers will take on Centre at 3 p.m. Sunday.