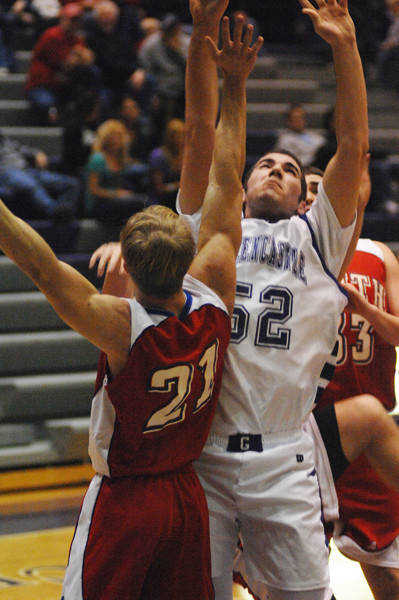 All it takes is one call.

One call can change the course of a game and that's what happened Tuesday night between Greencastle and South Putnam.

The game was tied 51-all with just two over two minutes left in the game. Greencastle's Jordan Hickman took the ball into the corner and drained a three to give the Tiger Cubs a 54-51 lead and then it happen.

The ref blew his whistle and gave South Putnam coach Micah Elliott a technical foul, allowing the Tiger Cubs' three-point lead turn into a 9-0 run and dashing any hope the Eagles had of winning the game.

"I was frustrated with the inconsistency of the game both ways and made a bad move and I believe he made a bad move, but I don't think I said anything that warranted a tech and that's hard to play through. The kids played through it but I didn't," Elliott said. "We fell apart after the tech. I fell apart after it and take responsibility for it and I told the kids that too."

In the end, Greencastle won 62-55, but it was a hard fought game until then.

The Tiger Cubs started the game with some hot shooting, with their first seven points coming from Ashton Marshall. He finished with 20 on the night.

Greencastle outscored South Putnam 15-8 in the first quarter, but the Eagles came back and put up 16 points in the second quarter to only trail by three at the half.

Marshall went 8-for-12 from the field for the night and 2-for-2 behind the three-point line and 2-for-3 from the free throw line.

"Ashton had a good game, he really did and he is kid we rely on to do a lot of things for us," GHS Coach Troy Greenlee said. "Our team is one of those teams that has a different guy that puts the ball in the hole and he was the one from the perimeter tonight. It was a good overall win for us."

At the start of the third frame, the Eagles came out and shot the lights out of the gym for a 6-0 run and took their first lead of the night.

"You got to credit South Putnam. We got on them early and they battled back," Greenlee said. "And I just don't feel like at times that we had the intensity that we needed to have. I thought we had a little let down in the third quarter when we came out and let them get a lead on us and that showed us that we just have to play our tails off all the time."

The Eagles were able to shut down Marshall in the last half of the game, but struggled with the Tiger Cubs' post players.

Kyle Nobles and Nick Hutcheson, both over six-foot-three-inches, hurt the Eagles in the paint. Hutcheson put a few points in the third for Greencastle, but it was Nobles who made them hurt. He scored six in the fourth and 11 for the night with five of those points coming from the charity stripe.

"We were standing behind them to much in the post, and I will give them credit, they got two very good post players," Elliott said. "We played solid tonight. We did the things defensively well enough to win the game, but not offensively."