Filibustering not what we think 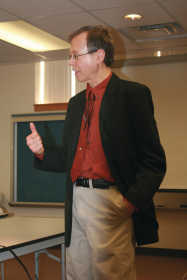 Purdue University History Professor and Author Dr. Robert May explained the early meaning of filibustering and how it influenced the outbreak of the civil war. May was at the Putnam County Library Thursday afternoon giving his presentation.

Dr. Robert May, who is professor of history at Purdue University, presented a lecture about antebellum America and filibustering at the Putnam County Library Thursday.

His discussion was a fitting subject on Abraham Lincoln's 200th birthday. May offered ideas about questions historians have been debating since the 1930s.

Did the civil war have to happen?

Using his new book, "Manifest Destiny's Underworld," May explained the important impact that filibusters had in the years leading up the Civil War.

"The war was not inevitable. Lincoln made a decision in his term that helped led to the Civil War," said May.

The term "filibuster" is today a hijacked term meaning longwinded speeches designed to create logjams in the legislature. Before the Civil War, the term referred to American adventurers who invaded or planned invasions to foreign countries in which the United States were at peace.

May discussed the influence of filibustering with the tensions that were threatening to tear the country apart during the 1850s. In the decade before the Civil War, slavery and filibustering were thickly intertwined.

Some filibusters solicited Southern support for their efforts with the implication that they would be spreading the institution of slavery into conquered territories. In other cases, as filibustering began to be thought of as more of a southern activity, the implications were more direct.

He explained that while Lincoln was still in Springfield prior to his inauguration, he encouraged his fellow Republicans to reject the Crittenden Compromise. This was a last-ditch effort to avert the Civil War proposed in 1860 by Sen. John Crittenden of Kentucky.

Basically, the compromise accepted the boundary between free and slave states that were set by the Missouri Compromise earlier and extended the line to California, and assured the continuation of slavery where it already existed.

Additionally, it advocated slavery in the District of Columbia and upheld the fugitive slave law from 1850 and called for suppression of the African slave trade. It failed in the House of Representatives by a vote of 113 to 80 and in the Senate by a vote of 20 to 19.

More importantly Lincoln feared that passage of the compromise would encourage more filibustering by American "terrorists" in South America and other countries.

"America was considered a 'rogue nation' because of the filibusters. Lincoln sent letters back to the members of his party not to vote for Crittenden's Compromise in order to stop filibustering," said May.

He also talked about several notable characters involved in filibustering, including Narciso Lopez, who dreamed of taking Cuba; William Walker, the doomed conqueror of Nicaragua; and Mexican War hero and Mississippi Governor John A. Quitman.

"Filibustering was celebrated by many circles as a glamorous incarnation of the spirit of Manifest Destiny. Some participants in filibuster expeditions became larger than life figures, and their exploits were lauded in books, songs, theater productions, and in the popular press," explained May.

"They had parades, fundraisers and placed ads even though filibustering was illegal. They used codes like the Greek alphabet to send messages about meetings and people," he said referring to filibusters as "America's Social Cancer."

Latin America was a favorite target for these expeditions because of political instability. Many of the filibusters would claim that they were actually "liberating" a supposedly inferior culture through conquest.

May tossed in entertaining trivia showing a photo of Quitman's antebellum mansion that is now a bed and breakfast.

"It's rated as one of the ten most romantic places in the country," he quipped. "For a lot of money you can even sleep in the Governors bed."

May's book, "Manifest Destiny Underground" is available on Amazon.com and at Barnes & Noble.

This is his fourth book. He is also the author of "Old South Crusader," "The Union, The Confederacy and The Atlantic Rim," and "The Southern Dream of a Caribbean Empire." He is a history professor at Purdue University in West Lafayette.