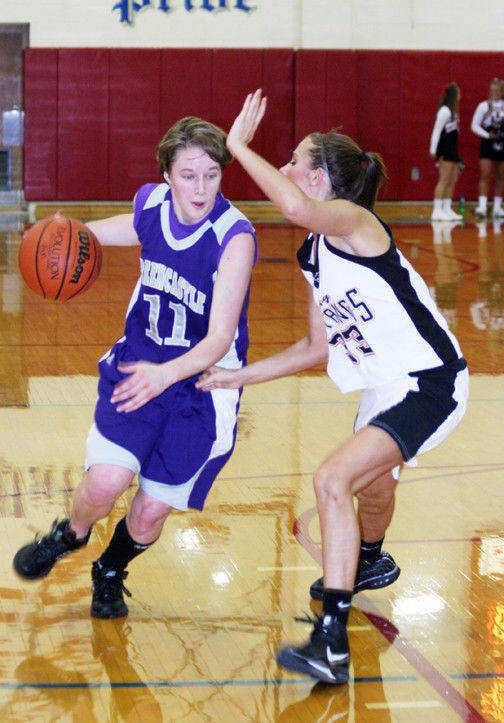 SPENCER -- The game of basketball is all about breaks and at Friday's sectional semi-final at Owen Valley, Greencastle didn't get a one. The Tiger Cubs controlled most of the game before falling in the final minutes to Edgewood 51-50.

"We left it on the floor," GHS head coach Glenn Hile said following the contest.

The Tiger Cubs certainly did leave it on the court. Down nine with just under two minutes remaining, GHS continued to fight and did so until the final horn sounded.

The game was more than a little physical. As the game clock wound down, Greencastle began to pressure the Mustangs in hopes of creating some much-needed turnovers. On one inbounds play, an Edgewood player caught the ball, crossed with elbow elevated and caught GHS sophomore Mallory Miller in the mouth. Miller left the game, but would return later in the quarter.

The teams entered the final quarter with Edgewood holding the slight advantage at 32-30 and they would grow that lead to 10 points before the Tiger Cubs would respond.

GHS began to reap the benefits of their press and shaved the Mustang lead six when Hannah Spencer converted a tradition three-point play bringing the score to 49-43. Miller returned to the game and quickly made her presence felt by connecting on a three-pointer from the corner and it looked as though it was the Tiger Cubs' fate to be in the sectional final Saturday night.

With 32 second remaining, Greencastle received possession after a jump ball call, but was unable to capitalize on two chances to take the lead. Edgewood's Lauren Kalb connected on two free throws down the stretch to seal the win for the Mustangs.

"I'll tell you, that flurry at the end there -- we were down nine with 1:47 to go and then had two chances to take the lead and just came up short. It was a heck of game for us to play," Hile said.

Greencastle received two monster performances from Spencer and Miller in the second half. The duo combined for 28 of Greencastle's 35 points and ended the night with 18 and 19 points respectively.

Kayla Nobles, Tennille Burgeson and Kelsey Wainman came off the bench and although they failed to score, the trio played tough defense and helped Greencastle make their run at the end.

"All eight girls that got into the ballgame gave everything they had; we overcame a lot of stuff," Hile commented. "It was a very physical game, a very rough game and we never gave in. We held our composure."

Friday marked the final time that Grivas, Alspaugh, Spencer, Wainman and Jess Miller would step off the court in the high school careers, and it was difficult for Hile to conceal his emotions following the game.

"I just feel horrible for our seniors," a visibly upset Hile said. "I really thought we were really going to be in that championship game and we thought that from the get-go."

Hile continued to speak about his team's performance and how close they were to advancing. For all the thoughts that were probably racing through his mind, Hile broke everything down to a single sentence to describe his feelings.

"I just can't say anything more than how proud of them I am," he said with a slight smile.