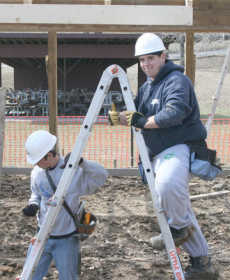 Cloverdale High School students (from left) Brian Stout and Jeff Dale were up on ladders nailing trusses down on the new shelter at Greencastle's Robe-Ann Park.
Order this photo

Area 30 Building and Construction students were busy hammering Wednesday afternoon as they raised a new shelter in Robe-Ann Park.

Next they plan to put on the roof and will then be able to pour the concrete for the floor.

Area 30 class instructor Donny Watson says the new shelter will be ready before the annual Easter egg hunt in the park.

Watson and his assistant instructor Harry Porter have been waiting for warm weather so the class could work on the project that started last fall when they tore down the old shelter.

"The poles have been in since December, but we needed warm weather to keep working on it," said Watson.

Earlier in the day, Jake Zaring helped the class raise the roof with his 82-foot crane.

The building trades construction project at Area 30 was created as part of a method of moving from textbook learning to hands-on instruction for students.

They have built homes, helped with the People Pathways and worked on various other projects in the county.