By SALLY GRAY, For the Banner Graphic 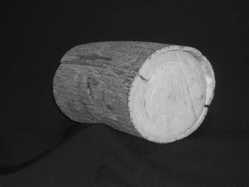 This segment of mastadon tusk is now on display at the Putnam County Museum.

V. Maury Smith was the son of O. H. Smith, who taught in the DePauw University Physics Department for many years.

Maury grew up in Greencastle and was active in the Boy Scouts.

For a couple of years he was a student of forestry at Washington State University. Then at the age of 20 he headed to Alaska where he live most of the rest of his life.

In Alaska, Maury first worked for Weyerhauser, then served as a U.S. Marshal, wrote for a Fairbanks newspaper and had a radio program.

He became well known and eventually served in the territorial legislature. When Alaska became a state, he was elected state senator.

Frank Durham grew up with Maury and maintained a friendship with him until his death. He visited Alaska many times. It was on a trip to see him that Maury gave Frank the section of a mastodon tusk that is on exhibit at the Putnam County Museum.

Maury shared with Frank the story of how he came in possession of the tusk segment.

The mastodon skeleton was found in the tundra of northern Alaska. Maury was there when the excavation occurred and related that someone had a saw and everyone present cut off a sample of one of the tusks.

Maury gave the piece of tusk to Frank and Frank gave it to the Museum in memory of his first wife, Frances.

The V. Maury Smith stories, as related by Frank, go on.

For example, when Maury was a child in Greencastle, he had a husky type dog which in the summer hauled Maury around in a wagon and in the winter, on a sled. (Was this the beginning of Maury's facination with Alaska?)

Maury's wife, Nell, was an Alpha Gamma Delta at DePauw, but for most of their courtship Maury was in Alaska.

When he proposed from Alaska and she accepted, Maury sent Nell a ticket to Alaska -- a one-way ticket.

According to Maury, the wedding celebration lasted a week -- though it isn't known if the bride and groom stayed around that long.

On one visit, Maury took Frank to meet a 70-year-old woman who "mined gold from her kitchen."

Sure enough, she showed Frank a kitchen pump from which she claimed she drew water that contained gold; next to the pump were three small jars filled with tiny gold nuggets.

So what, you ask, is a mastodon?

It is an extinct mammal related to the elephant. The earliest mastodons are believed to have lived in Africa in the Oligocene epoch (38 million years ago).

They were long-jawed with four tusks and measured about four and one-half feet in height.

Mastodons were browsers because they lacked grinding molars which are found in mammoths and modern elephants who feed primarily on grasses.

The mastodon may have been driven to extinction in North America by a combination of being hunted by humans (who arrived here about 13,000 years ago) and tuberculosis.

The segment of the mastodon tusk is a special addition to the Putnam County Museum's Natural History exhibit.