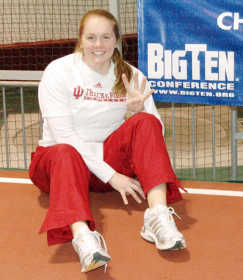 The Hoosiers finished fourth, the best for IU since 2003.

"I have mixed emotions about the meet." Ness said. "On one hand, last year I placed 14th, so I improved 10 places and scored points for my team. On the other hand, I missed third place by less than an inch."

After the competition, Hoosier coach Jermaine Jones noted he was happy with Ness's performance.

"I am very pleased with Kristen's performance. She made a big improvement over last year. Just as important, she mentally knew she could compete and win," Jones added

Earlier this year at the Tyson Invitational, Kristen had a career best heave of 17.93m (58-10) in the weight throw. The toss was the third best by a collegiate, and was just a quarter inch shy of the second best throw made by Mikaela Johansson of Oklahoma. Ness increased her career best by 32 centimeters. The heave is the fourth best in IU history.

Ness is a 2006 graduate of Greencastle High School. During her Tiger Cub career she was a two-year state finalist in the shot put.