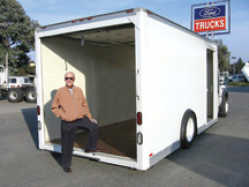 Dallas Smith will be honored in Detroit in April with the 2008 SAE Henry Ford II Distinguished Award for Excellence in Automotive Engineering.
Order this photo

The president of a Greencastle company has been selected as a recipient of the 2008 SAE Henry Ford II Distinguished Award for Excellence in Automotive Engineering.

Dallas Smith of Dallas Smith Corp. will be honored at a ceremony in Detroit in April for leading the design, development and production of a new type of Ford F-450/550 Super Duty Truck platform vehicle.

Smith was humble about his accomplishment.

"The Axleless air-ride suspension system is a true representation of a product being built, tested and certified by the industry's best. I am proud to have such a talented group of individuals working on the Axleless program."

"This honor recognizes your unique inventive and engineering disciplines," a letter to Smith from Amy Schoeffel, marketing coordinator for the SAE Award and Scholarship Program.

The Henry Ford II Award recognizes individuals who use their engineering skills to achieve product or manufacturing process contributions which are assessed to have had the greatest positive effect on the passenger car, truck and bus industries. Established in 1988, the award is funded through Ford Motor Co. and honors the memory of Henry Ford II.

Smith, 89, started his company in Indianapolis in 1954. He moved the operation to Greencastle in 1997.

Smith attended Indiana University from 1938 to 1940. He joined the Indiana State Police in 1941, and enlisted in the U.S. Air Force in 1942. He was discharged from the service as a first lieutenant at the end of World War II. In 1954, he took early retirement from the State Police and opened Dallas Smith Corp. in Indianapolis.

This first venture was a company focused on the development, ownership and operation of automotive pre-delivery centers that provided new car get-ready services for General Motors, Ford and Chrysler. This division was sold in 1969.

Smith also formed a trucking division in 1960 in Phoenix, Ariz.

Presently, Dallas Smith Corp. is working with a number of manufacturers and upfitters on the development of safer, smarter and easier transportation.

"With the transportation industry increasing its demand for more efficiency, DSC is taking on that challenge by providing its customers with a simple, yet innovative solution to many of today's transportation problems," said Garrett Smith, vice president of Dallas Smith Corp.