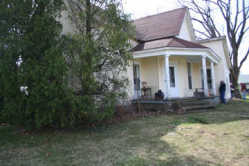 Habitat for Humanity's latest project was kicked-off Wednesday as demolition began on this house in Roachdale. Once the house is razed, a new one will be built behind where this one now stands. It is the last house of nine to be built on this acreage.
Order this photo

Since the first Habitat for Humanity home was built in Putnam County in 1989 on Avenue E in Greencastle, 17 more have been constructed by the non-profit group.

Demolition has begun on their latest project in Roachdale. The house standing on the corner of Indiana and Westview Streets is being knocked down to make way for the construction of another house.

"We're going to build the new house behind where this one stands. It has a basement that has to be filled in and it takes over a year for that to settle," explained volunteer and board member Barb Hill.

Construction should start on April 18 and be completed by early June.

Two families are currently being considered to receive the house. The final cost will depend on which family is selected.

"One is a larger family that would require five bedrooms. Most of the other houses are three bedrooms. Those cost about $45,000 to build," said Hill.

This house is the ninth one to be built on the four acres of land donated to Habitat in Roachdale.

"We got it from the Roachdale Christian Church, who received it from Maxine Batman. Her stipulation was that her sister-in-law could live in the house rent free until she was unable to live there any longer," noted Hill.

Maintenance and taxes had to be paid for by the church.

"The house was not in good shape. It was probably built in the late 1800s and hadn't been taken care of very well in the last few years. The church decided they couldn't afford to take care of it and gave it to Habitat with the same restrictions," said Hill.

Eight other homes have already been built by Habitat on the land and this one will be the last in the Westview division.

Habitat is looking for volunteers to help with the project and for donations of needed supplies.

"We buy our lumber from Black Lumber and he always gives us a good discount. We also buy supplies from other businesses here that give us items at cost or good discounts but we appreciate any donations. We also really need help from volunteers," said Hill.

Anyone who would like to volunteer or make a donation can contact Habitat at 765-653-5360 or by email at barbhill@pchhin.org.

Habitat for Humanity was born on September 1976 when a group of supporters got together. The personal involvement of Jimmy and Rosalyn Carter brought the organization national visibility and sparked interest in Habitat's work across the nation.

The group experienced a dramatic increase in the number of new affiliates around the country and that included Putnam County. Eventually DePauw University students added an affiliate as well. The two groups came together to work on the first house in 1989.

Through the work of Habitat, thousands of low-income families have found new hope in the form of affordable housing. Churches, community groups and others have joined together to successfully tackle a significant social problem -- decent housing for all.

For information about Habitat for Humanity or to volunteer or make a donation, call 765-653-5360.