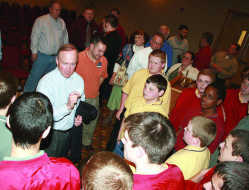 Gov. Mitch Daniels speaks with some residents of Res-Care Friday during his stop in Putnam County. Daniels was at the Walden Inn hosted by Greencastle Kiwanis.

These were just a few of the issues Gov. Mitch Daniels discussed with Putnam County residents when he stopped in Putnam County Friday afternoon.

"I travel a lot in this state," Daniels said. "That's the way I learn things. It's been the single most reasonable way for me to be an effective steward in this job."

Daniels appeared at the Walden Inn in Greencastle, hosted by the Greencastle Kiwanis Club. A crowd of residents from all corners of the county packed a meeting room for a chance to hear Daniels speak and ask him questions.

Daniels told the crowd that most of Indiana's $4.3 billion in stimulus money would be spent on education. Some would also go to repair local roads, he said.

Daniels called education his "hot button issue." He said he considered Superintendent of Public Instruction Tony Bennett the most important member of his administration.

Daniels said although the financial picture for Indiana -- and the entire country -- looks bleak at the moment, he has no doubt better days are ahead.

"The heart and soul of this problem is financial institutions," Daniels said. "I'm rooting for this administration to succeed. The American economy has surprised its detractors over and over again."

Bette Bertram expressed concern about the rise in crime rates connected to the faltering economy. She said she had heard rumblings that because of overcrowding in prisons, the more dangerous and violent offenders may be housed at the Putnamville Correctional Facility in the near future.

"I've not heard that suggestion," Daniels said. "I can't say that it's never been suggested, but I doubt it will ever happen."

Roachdale resident Marian Harvey said she was concerned about Indiana's high nationwide rank as an air and water polluter, and asked if Daniels intended to do anything about "the cruel practices in confinement farming."

"We have to get back to real farming," Harvey said. "Confinement farming is not healthy."

The answer to that problem, Daniels said, was striking a balance between small farms and larger operations. He pointed out that the number of small farms in Indiana grew last year.

"The real concern is protecting and promoting the environment without penalizing the future," he said. "The fact is, we will not feed the world without large scale agriculture."

Greencastle resident Kelsey Kauffman asked Daniels if he had considered putting geothermal energy in place at Indiana schools. Daniels called the theory "am interesting idea," pointing out that Ball State University is moving toward a completely geothermal campus.

"It will give me something to think about on the way back," he said.

"Anything that Mitch Daniels has been associated with has been a great success," Harrison said. "He has brought respect and success to the state of Indiana."

Daniels had words of praise for Harrison, too, noting that the high schooler had truncated his spring break to be at Daniels' appearance.

"I'm really bowled over that he would cut short his spring break to be here," Daniels said.