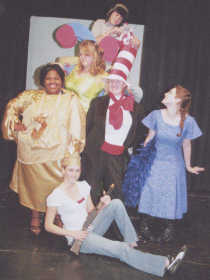 In celebration of Dr. Seuss, "Seussical" will be presented Friday and Saturday by North Putnam Thespian Troupe. The performances will be at 7:30 p.m. each night in the gymnasium of North Putnam High School.

Tickets are $5 and will be available at the door.

"Seussical" is a parade of well-known characters beginning with "The Cat in the Hat" played by Amber Jones and "Horton the Elephant" played by Nic Stanley.

To round out the cast of characters, there will be General Schmitz (Kyle Cunningham), The Wickershams (Brandi Powers and Michale Hall), The Bird Girls (Cara Stanley, Taylor Badten and Megan Schutter) and Yertle the Turtle (Brian Hubbard).

Linda Gjesvold is directing the show with vocal direction by Kelly Thomas. Thomas and Ashley Cook created the choreography. Kathi Elliott will play the piano with orchestra accompaniment under the direction of Rachel Clyngenpeel and John Pinson.