Eagles rally back over Clovers 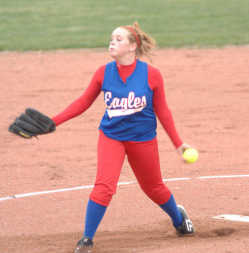 Sam Tomasino made her first appearance on the mound since her elbow surgery this past off season. She earend the win, pitching the first six innings before Brooke Boetjer relieve her.

Heading into the bottom of the sixth inning tied 1-all, Chris Jones' Lady Eagles needed a run badly -- they got three.

After Krystal Welch reached on a single and Emily Dabkowski popped out to right field, Oceaia Boetjer stepped up and jacked one deep for a stand up double, plating Welch for the first RBI of the inning. Then Brooke Boetjer walked into the batters box and proceeded to put another one of Paige Gutierrez's pitch's into the outfield for another RBI double.

Allysia Loller capped the inning off for the Lady Eagles when she singled, scoring Brooke for the last run of the inning, putting South Putnam up 4-1.

"The sixth inning was really huge for us," Jones said. "First Welch got on with a single and Oceaia hit her in, then Brooke hit Oceaia in and then Allysia hit Brooke in."

Cloverdale attempted to rally back in the seventh when Gutierrez nailed an RBI double, cutting the Eagles' lead to two, but came up short in the end.

"Mental errors cost us the game," CHS Coach Chuck Mowery said. "South Putnam is a good team and you can't make mental errors like we did against a team like South Putnam.

"Every inning we had a chance to score, but we just had poor base running," Mowery said.

When you take poor base running and mix in some solid defense from your opponent, you are usually left with a sour taste in your mouth and Mowery knows it.

"I think we ran ourselves out of three good innings tonight," Mowery said. "You just can't make errors like we did against a team like South."

Those words couldn't be any truer. Twice the Lady Eagles turned the Clovers' base running against them, turning double plays both times

Once in the third inning when Dabkowski caught Sam Smith's fly ball for the first out, then fired it to Brooke Boetjer at first, getting Kayla Shepherd for the double play. Then in the fifth inning, Dabkowski and Boetjer did it again for the second double play of the night.

"I thought we played a good defensive game as well. We took advantage of some base running errors they made and turned them into double plays," Jones said. "We got out of a lot of situations that could have been killer because our girls buckled down and got outs when we needed outs and kept it close. And then our hitting finally came around."

Making her first appearance at the mound for South Putnam since having elbow surgery was Sam Tomasino. She pitched the first six innings, before Brooke came in for relief. 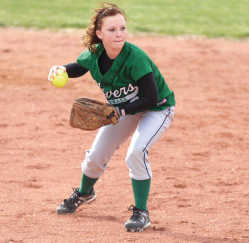 Cloverdale's Sam Smith readies to throw to first base during Wednesday's game.

"I was really glad to see Sam Tomasino get a win tonight. Sam pitched six great innings, coming off surgery. This was her first live game since having elbow surgery in the off-season," Jones said. "Brooke got our opening win last night and tonight she got the save."

In her first outing back, Tomasino gave up six hits and two runs, one of which was earned, while fanning two batters. Brooke gave up only one hit and one earned run.

Gutierrez added seven strikeouts and hits to her count, while picking up her second loss of the season.

The Eagles are back in action on Saturday when they host Terre Haute North and 10 a.m. Cloverdale hosts Owen Valley today at 4:30 p.m.