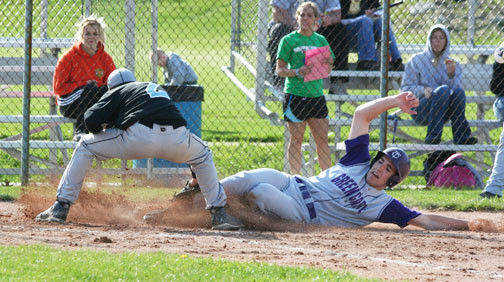 Greencastle's Kyle Nobles slides under the tag of Cascade's Connor Guthrie during the second inning of Wednesday's game against the Cadets. Cascade defeated Greencastle 12-8.

On Wednesday, the Greencastle Tiger Cub baseball team seemed to have Cascade's number; unfortunately the Cadets picked up in the fifth inning and put the game out of reach, winning 12-8.

Greencastle showed Cascade that if they expected to come to their home field and walk away with an easy win, they were in for a rude awakening.

"We hit the ball," GHS head coach Troy Remsburg said. "We made good contact tonight; just all of our errors came at the wrong time."

The Tiger Cubs welcomed Class 2A fifth-ranked Cadets with six runs in the first two innings of the contest and held the advantage until the crucial fifth inning.

In the second inning, Trey Ford and Pat Richardson hit for doubles, helping spur the four-run barrage. Logan Grzesiek, Kyle Johnson, Ford and Kyle Nobles all scored in the inning.

Cascade put a run on the board in the top of the fourth to pull within one at 6-5. The Cadets found the offense they had been searching for in the fifth inning, putting up five runs and taking the lead for good.

The Tiger Cubs cut the lead to 10-8 when Richardson and Bartrum scored in the fifth, but a two-run shot from Cascade's Henry Heimansohn in the top of the sixth sealed the deal for Cascade.

The GHS bats went cold in the final two innings, resulting in the 12-8 loss.

Remsburg, although not pleased with the loss, was impressed with the effort that his team gave on the evening. They responded to everything the Cadets threw their way and had more than a few chances to walk away with a win.

Ford had a big bat for the Tiger Cubs, going 2-of-4 with two doubles and three RBIs.

"I'm happy with our score, we got beat by four," he said. "It could have gone the other way, but we didn't make our plays and a few less strikeouts and it's a whole new ballgame. All in all, the way we've been playing here lately, I'm pretty happy with the way they played tonight.

"They showed some heart and didn't give up," he added.

Remsburg noted that it seems that once his team gets down a few runs, they stop talking and begin to give up. He also commented that the team continues to improve each game and he can't ask for anything more.

The Tiger Cubs will get another shot at Cascade today on the road and for Remsburg it boils down to keeping errors down and putting the bat on the ball.

Greencastle travel to Cascade today for a 5 p.m start.

Next game -- Greencastle travel to Cascade today for a 5 p.m start.